Set on a train, a passenger let's his worries get the best of him.
READ REVIEW
Next Previous 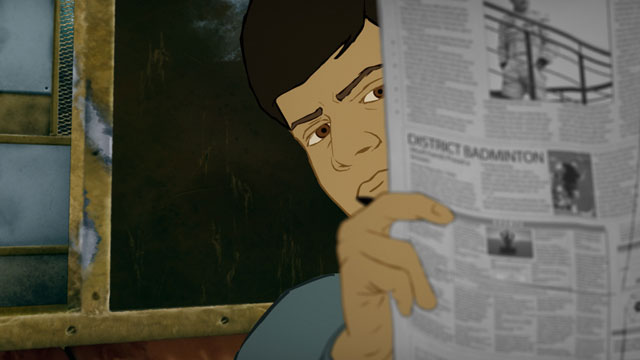 I admit, there seems to be a bit of a train theme running through my picks as of late, for which I can only blame Miss Rebecca De Mornay planting her Risky Business choo-choo obsession in my young impressionable brain.  That said, with pieces as strong as Paranoia being made, it’s no wonder I feel compelled to write about them.

Highlighting the raised state of anxiety so many of us live under in a world reportedly under constant attack in a war against terror (the atmosphere following the 2006 Mumbai train attacks was a particular frame of reference), Paranoia is the story of a lone man traveling the late night Mumbai local train, who when joined in the carriage by a silent man with a briefcase, begins to dot the i’s and cross the t’s of his imminent explosive demise, or at least that’s what he believes

Created over seven months by Thakur-Toonskool Advanced Animation Academy students Sandeepan Chanda, Sunil Yadav, Amrita Mukhopadhyay and Nitesh Mishra as part of their final year degree project, Paranoia is an impressive display of the mastery of detail to convey the claustrophobic, suffocating sense of desperate emotion felt by our lead. This is all the more impressive given the absence of expositional dialogue or manipulative music, instead a nuanced sound design combines with the visuals in setting the tone.

To prepare for the project, the team travelled the late night local trains for three days, recording location train sounds and photographing the bogie (carriages). An animatic was created to finalise the pace of the 53 shots needed, each of which had to be animated, inked, background painted and composited.  Whilst predominantly a 2D animation piece, live-action plates were shot and then rotoscoped in Flash with all the background plates created in Photoshop. To asset with the match of camera angles from the action plates and the drawn backgrounds, a 3D model of the bogie of the train was built. Once the angles were locked, a still was rendered as a working blueprint. 3D modelling of the carriage entrance was also used once the team realised the complexities of the shadow play as the train pulls away from the station enabling them to hit the model with passing lights to replicate shadow movement.

The attention to detail in Paranoia (especially the sound) makes it more than worthy of multiple viewings, and the film has rightly screened at a stack of festivals picking up the Awards of Excellence at ASIFA India IAD’10 and the 24fps Awards at MAAC India along the way.