The story of a solitary traveller who dreams of his own romantic encounter at the station through the images laid out on the pages of his sketchbook.
READ REVIEW
Next Previous 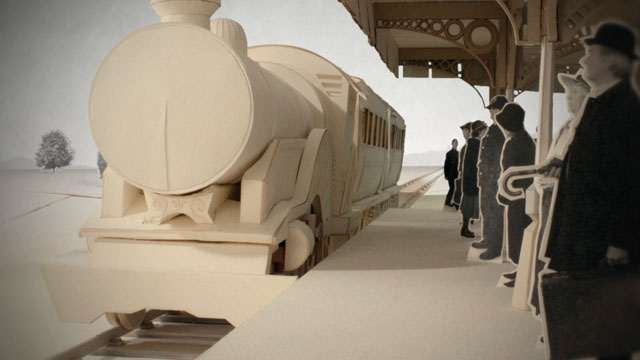 With access to so many outstanding films online, I hesitated slightly before selecting this pick given that we very recently featured Matthias Hoegg’s Thursday, for fear of accusations of over mining the same vein. However it would be equally unfair of me to discount Leo Bridle and Ben Thomas’ painstakingly brilliant graduation short Train of Thought simply because Leo and Matthias share the same creative roof at Beakusa company that obviously has superb talent spotting skills.

Occupying similar (although minus the heartbreak) ground to classic ‘love and railway stations’ films such as Brief Encounter, Train of Thought is the story of a solitary traveller who dreams of his own romantic encounter at the station through the images laid out on the pages of his sketchbook, which act like a predictive, illustrated version of Bjork’s Bachelorette book.

Pitched to and selected by their course at The Arts University College, Bournemouth, Bridle and Thomas drafted in help from fellow students across the university working in various disciplines such as cinematography, sound design, acting, model-making and costume design. Inspiration for the film came from Bridle’s own travel and cut out photo music videos the pair admired:

In terms of coming up with the concept for the film, I had been spending a lot of time on trains and also sketching around the time of the pitch. I also really loved a couple of music videos that used a cut out photo technique (Guster-Satellite by Adam Bizanski and Trenchcoat  Whatcha Got by Rogier Wielandand I thought that there could be a cool short film that mixed this kind of harsh edged, paper stop motion with the flowing lines of sketchy drawing. (via ozanimate.com)

Storywise, Train of Thought is a fairly simple, unsurprising tale but, as is often the strength of animation, the execution of that story is what glues you to the screen. With a mix of cut-out live action, stop motion, paper craft, green screen, rotoscoping and sketched animation reminiscent of A-Ha’s Take On Me promo, Train of Thought is a visual feast that could easily have become an overload of technique, were it not so gently handled and paced to the Portico Quartet’s score.

Equally compelling as the film itself is the making of video, which gave me an even greater level of appreciation for the pair’s attention to detail and sheer level of patience in putting Train of Thought together.