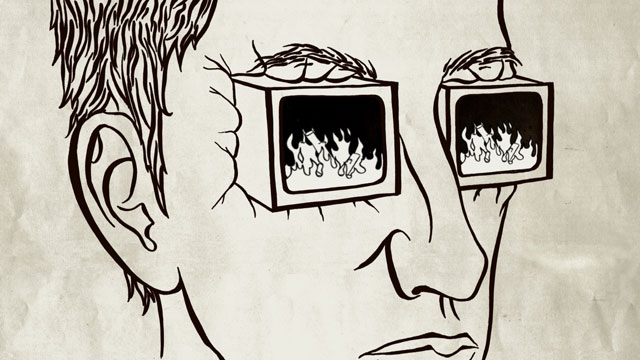 Resembling an animated Roy Andersson movie, In the Air plays out a series of bizarre vignettes where we witness the impact television has on a dystopian society. With the “idiot box” often accused of corrupting its viewers and degrading morality, Klemet’s film explores how people are affected by the media they digest. The story takes place in a world where everyone’s actions are controlled by what they see on screen. Anyone who has read 1984 will recognize the influence of George Orwell’s novel, and the world Klemet has created is most certainly an “Orwellian” one. However, in this case, the Estonian animator sidesteps Orwell’s bleak approach, and uses dark humour to show us an oppressed society under control.

What’s interesting to see throughout In the Air is how in parts it is a product of the media Klemet has consumed throughout his own life. Alongside the influence of Orwell in his film, we can also see the influence of video games, exercise videos and TV news—a Prince of Persia video game sequence being a particular standout moment. Being a surreal animation with dark comic undertones, it’s also hard to ignore the influence of Terry Gilliam’s animations may have had on Klemet’s film. There’s definitely something a little “Pythonesque” going on within In the Air.

Klemet’s film has a particularly surreal atmosphere to it, which can be equally attributed to the fantastical world that he’s created—the peculiar sequences that unfold throughout and the unusual animation style. Using stark, minimalist black and white animation, the characters of In the Air come to life as if they are being sketched out on a notepad right before our eyes (Klemet even goes as far as adding a paper texture to the film to emphasize this stylistic choice). It’s a style definitely suited to its subject though, as the frantic, twitching visuals are a pitch perfect match to the odd story being told.

Estonia has a great tradition in the field of animation with studios like Nukufilm and Eesti Joonisfilm (the studio from which In the Air was produced) having developed a well-established history in their own particular fields. The animated work coming from this nation consistently raises thought-provoking ideas and always challenges viewers with the images they create (something that animation isn’t always recognized for). Estonia’s often dark and sometimes overly-serious animated work may not be to everyone’s taste, but with powerful pieces like In the Air and Kaspar Jancis’ Crocodile (which won last years Cartoon d’Or in Hungary) leading the way, they are once again proving why they are known as the “little big nation of animation” (Heikki Jokinen).