Suspense builds as a bystander watches two running men and contemplates the motivations of the scene in this short from aboriginal Australia.
READ REVIEW
Next Previous 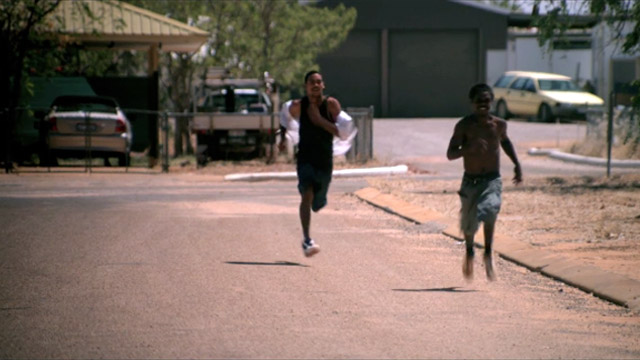 Rightly or wrongly we all make up little stories about the people and situations around us constantly throughout the day. Perhaps the woman crying opposite you on the tube just lost her job or the guy shouting excitedly down the phone just became a father? These stories are how we attempt to make sense of the world, how we judge situations and individuals in a vacuum of knowledge until we can fill in the blanks and reform the imagined into the concrete actual. Dominic Allen’s short Two Men takes that split second judgement process and makes it vocal and visible.

Two Men presents a Sitting Man’s speculation about the reasons why the two men of the title maybe running through the heat of an Australian afternoon. Is it a robbery, a fight or simply two guys running just for the hell of it? Allen presents each possible explanation through beautifully shot Red Camera cinematography from Joel Betts before a brilliant blue outback sky underpinned by the rich browns and yellows of the arid earth. The origins of the story come from The Men Passing By, a short work by Kafka which Allen transposes from its original urban setting to Kimberly Town of Fitzroy Crossing, Australia, supported as part of a local community project that aims to ‘build stories, strength and resilience in Kimberley’s youth’;

My hope was that by retelling a hundred year old philosophical tale set in a European city at night in such a different context as deep in the Australian Kimberley in the heat of a sunny day and by having it retold by a modern Indigenous thinker, I would affirm an element of humanity’s commonality, celebrate the robust and healthy youth of Fitzroy Crossing and reinforce Kafka’s point that it’s impossible to ever truly know another’s motivations.—Dominic Allen via Vimeo

Allen, a director and producer with experience in promos and documentary, used exclusively non-professional actors for the roles in Two Men recruiting talent locally, and worked closely with the film’s narrator Ismahl Croft, to develop and extend the relocated scenarios into the final script which was then translated into Walmajarri Creol, a local dialect very similar to English by Croft.

Two Men won the Best Emerging Filmmaker award at The 58th Melbourne International Film Festival and is proof positive that when correctly executed, the simplest of concepts can convey the most powerful of ideas on screen.