Harmony Korine & Die Antwoord team up for this bizarre film that follows the antics of two wheelchair-bound rapscallions.
READ REVIEW
Next Previous 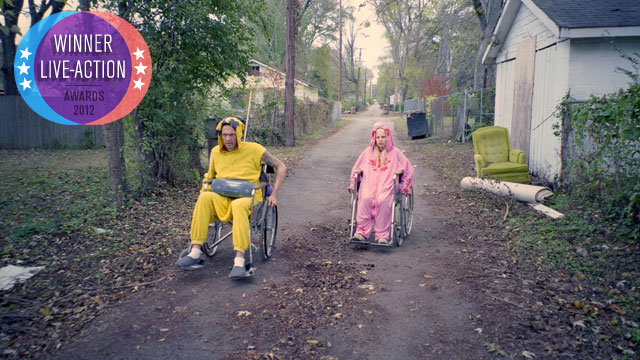 This is a good day for online short film. Two really high profile shorts that had their worldwide debut at SXSW are already online. The second one I’ll write up later today, but first I want to point you to this 16 min collaboration between the class clowns of the music world, Die Antwoord,  and l’enfant terrible of the art-film world, Trash Humpers director Harmony Korine. I have no idea what to expect, it could be brilliant, or unwatchable, though I doubt it will be anything inbetween.

Update: Winner of “Best Live-Action” at the 2012 Short of the Week Awards. Sondhi Writes:

“It’s a clichéd anecdote to make, but Umshini Wam works on multiple different levels, and as such is one the most perfect collaborations yet seen between artists in the short film realm. The comedy is most easily apparent, what with the pajama outfits and wheelchairs, spoofing Natural Born Killers-style spree films in a way that jives perfectly with the outsized internet-personas of the performers Die Antwoord—ridiculous, and yet somehow still maintaining an edge. As performance, a filmic space for two weird entertainers to function, it is likewise a success, with Ninja’s “big-bong schlong” freestyles and Yo-Landi’s insane dolphin calls being uproarious. But to somehow fit heart and genuine pathos into this convoluted whole is a testament to director Harmony Korine. Even further, add the setting which is Africa. War, problematic race relations and cultural imperialism are all legacies implicitly present. Take the totality of opportunities to read social commentary into the film, and you could write a book.”