Enter the disturbing world of David OReilly (Please Say Something) for a spin into low-poly, subconscious madness.
READ REVIEW
Next Previous 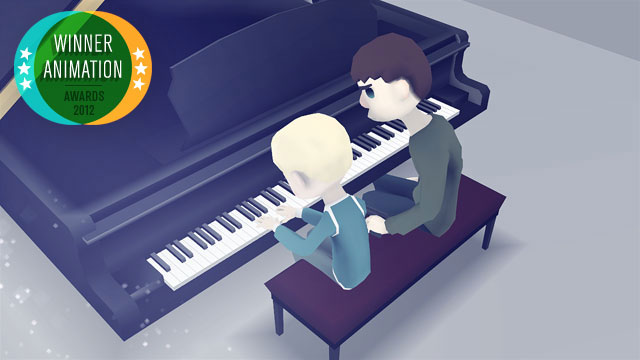 It’s rare for us to mention a filmmaker twice on our site, but even more rare for us to twice crown one’s work as Short of the Week. In fact, I’m sure we’ve never done it. We tend to be drawn toward the new and exciting, a feat most short filmmakers are lucky to pull off once. But all of that ends today with David OReilly’s opus, The External World. His previous short, Please Say Something, is one of our Top 10 Short Films of 2010, so after The External World found success at the Venice Film Festival, Ottawa Int’l Film Festival, and Sundance, David keenly posted the film online.

I referred to the film as an opus, and perhaps I can explain why the analog is suitable. The External World is both grand in scale—17 minutes long—and, much like a musical opus, is composed of a set of separate compositions that run together. Each composition represents a new setting and new characters in a funny yet often bleak set of circumstances. (not unlike Don Hertzfeldt). In one scene, a box of tissue screams each time a crying girl yanks a tissue from its box. In another, a patient stays at a “Nothing Is Wrong” hospital. These aren’t so much as stories as they are a glimpse into David’s unbounded imagination—a darkly comedic world where irony is called out in titles. But unlike Hertzfeldt, David has managed to hit a deeper emotional chord with his twisted comedy—one that hints at an underlying darkness in our world.

Stylistically, The External World follows in the same low-poly, video game-inspired aesthetic from Please Say Something, however there is a certain maturation over its predecessor. Characters and movements are more refined with cameras that move beyond the orthographic video game perspective and closer to live-action camera movements. It’s a difficult feat to evolve a very stylized aesthetic—one that more money and resources too often vandalizes. David deserves credit for refining an aesthetic without killing its spirit.

David received a fair bit of flak from his diehard Please Say Something fans who had hopes of The External World being more of a PSS 2 with a continuation of its two lovable cat and mouse characters. But I’m glad to see him shelve that and dig for more original work. It’s kept his work fresh and exciting— the type of work that deserves a second honor here at Short of the Week.