The Grim Reaper waits patiently as the residents of a small western outpost turn on one another in this student film from The Animation Workshop.
READ REVIEW
Next Previous 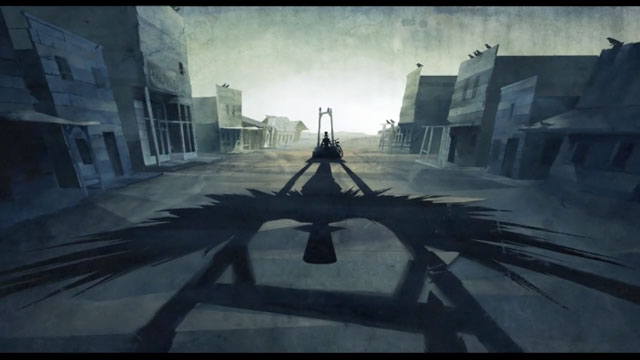 This short animation we tweeted and F’Booked yesterday, as it began to make its presence felt early in the day on Twitter . Thought about holding onto it for a feature review, but now, having been featured on Motionographer, Cartoon Brew, and /Film, we’ll just jump in to sing its praises too.

The Backwater Gospel is a gloriously original, daringly macabre animation short out of Denmark. Amazingly it’s a student-work, conceived and executed by pupils at The Animation Workshop, a renowned institution in European animation circles. The story:

As long as anyone can remember, the coming of The Undertaker has meant the coming of death. Until one day the grim promise fails and tension builds as the God fearing townsfolk of Backwater wait for someone to die.

We have been getting used to excellent student animations in recent years, most notably out of the French schools, but while most of those films are notable for their  technical mastery and precocious handle on action, The Backwater Gospel excites due to its assured vision in design, and mastery of its dark tone.

Bo Mathhorne directs a core team of 8 students, and he and Animation Lead Arthur Gil Larsen have produced, as part of their class assignment, making-of videos. They are also being very active in the various comments sections for you animators reading. So check it out, 10 minutes is worth your time for one of the most original animations I’ve seen in quite a while.