Separated by the sea, a unique duo pass along details of their lives through a bottle. An elegiac animation of minimalist perfection.
READ REVIEW
Next Previous 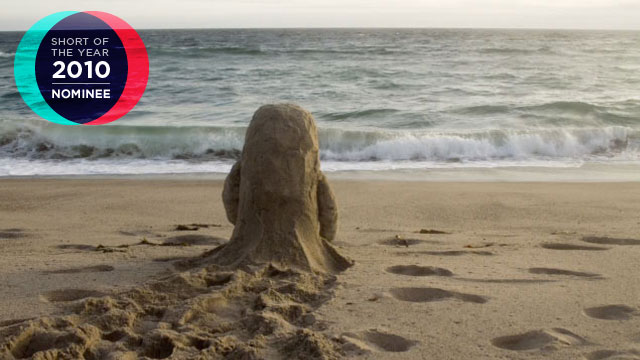 Kirsten Lepore must be very much in demand. She just has to be. She has the most perfectly attuned sensibilities I have yet seen in a short filmmaker towards what is current in culture. Her animations, a mix of twee and handicraft enveloped in bittersweet wrappers, are amazing artifacts; clever and nostalgic in mood, precious and handcrafted in design—these films celebrate life, but never far from that sentiment is the specter of loss.

Bottle is her greatest achievement yet. Winner of the Vimeo Audience Award for Animation this year, it tells the story of two unlikely penpals; one a mound of sand, the other a pile of snow. Each are endowed with sentience and mobility and come to know each other by trading details of their lives through a floating bottle. The result is visually inventive, yet also emotionally affecting. Bottle is a film which showcases Lepore’s rapport with current culture, but also her precocious handle on timeless storytelling.

This combination has earned the film due praise—it was my favorite film of that Vimeo Fest, though I’m ashamed I hadn’t caught it earlier, having enjoyed Lepore’s prior film, the cupcake odyssey Sweet Dreams, so much. Bottle is quite a different film however, even as it maintains her distinctive voice. Sweet Dreams is set-based and delivers a cute and controlled menagerie of perfect taste. It came at the height of America’s urban cupcake-craze and perfectly nailed hipsterdom’s “sweetspot” for irony and for cutesy materialist ornament. Bottle is similarly trendy and fresh, something Lepore seems to be able to effortlessly achieve, but expresses this through technique rather than art direction.

This is arguably a reach, but Bottle captures a current cultural desire to engage in the world on a physical, experiential level. This cultural desire expresses itself through the fetishization of craftsmanship, workwear, rustic Americana, roots music, biking, hiking et al. The short film is able to do this by inventively leaving the cramped animation studio to create stop-motion out in the world—an outdoors, on-location stop-motion that I can only imagine to be hellish in practice. The result is worth it however, unique and interesting. I have seen the world play a role in stop-mo, the graffiti of Blu notably, yet he creates representations on the world, not of the world as Lepore does here. 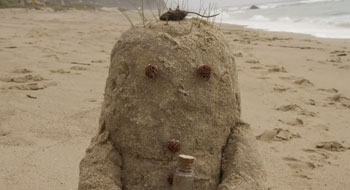 This larger cultural flow which Bottle latches on to can be seen as reactionary, a consequence of the mediated and seemingly inauthentic substance of modern life. The film understands this, obliquely addressing modern disconnect via the loneliness and desire for contact that the two characters exhibit.  It is a well worn theme, but is nonetheless as relevant as ever, trapped as we are in an infoculture advancing faster than we can keep up. The desire of the characters for physical interaction rather than the mere continuation of bottle-messaging can be read as a statement to this effect.

However the short film would not have garnered the affection it has received simply as a document of exquisite taste or even insight, instead it is the depth of feeling the two abstract masses are able to engender that endears the audience. The heart of the film’s skill in this regard is a unique process by which the characters are personified. Through the co-opting of gifts into their bodies, Sand and Snow progressively individualize themselves, allowing for deeper attachment by the viewer. It is a clever sequence and the character’s pleasure is infectious, overcoming the inherent difficulty presented by the amorphous character design and the film’s brief run-time. That said, this sequence has interest beyond mere utility, it is also a profound statement. The character’s transformation touches on philosophy and psychoanalytics, dramatizing theories of ego-formation and individuality, which posit that these concepts are wholly dependent on contrast—the presence of an “other”.

The popularity of Bottle online has lead to a series of interesting Q&A’s with Lepore becoming available for those in search of further insight. However don’t let this lengthy review discourage you from enjoying the film. Like all great works Bottle is open to interpretation, but at its primary level it is a simple concept, beautifully executed, and it’s this purity and heartfelt emotion which has inspired such contemplation in me.