Relive the teen serial dramas of the 80's with a decidedly modern twist in this short made by special effects mavens Team G.
READ REVIEW
Next Previous 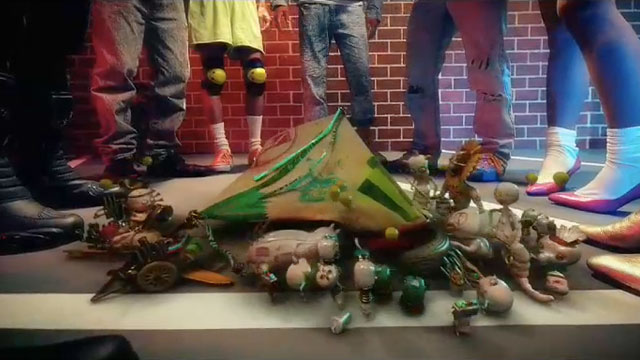 Director William Campbell and his cohorts are part of an L.A.-based collective known as Team G Entertainment, and in cooperation with New York-based collective Superfad, Campbell has created a unique blend of highly stylized live-action and 3D computer animation that is masquerading as a lost VHS tape.

Looking like some sort of sick cross between In Living Color and Saved by the Bell, The Nature Between Us is colored in enough bright neon to make Speed Racer jealous. As the camera swings between cliques of graffiti artists, popular girls, and radical bike dudes, a laugh track underscores the artificialness of the “street scene” set around them.

The so-unhip-it’s-cool dialogue is a winking satire of 1980s kids sitcoms, and it’s delivered with a Laugh-In kind of pace over a music track that’s so loud it threatens to cover up what the characters are saying. If it sounds disorienting, that’s just the beginning. Underneath the film there appears an older recording that flashes in and out. That scene seems genuinely real, and involves a secret crush between two of the teens.

It’s this kind of juxtaposition of moods and feel that makes Nature so compelling. The teenagers are all boastful cockiness when they are all together on the “fake” TV set, but when they’re alone outside, it’s a different story.

The last layer of the film concerns a nearly unseen small community of creatures who are having their own party of sorts. The blending of CG animation into the TV set atmosphere is impressive, especially to the teenagers, whose curiosity mimics the audience’s, as they stop everything to get a closer look. The discovery of this strange clique by the posturing teens results in one moment of genuine awe where the kids realize they’re not alone in this world. Or something like that.

Lately, William has been busy working on a new short Ike’s Kream. Watch the trailer and other latest work at Gentlemen’s Scholar.