Beautiful soft-spoken film about a son's attempt to reconnect with his estranged father.
READ REVIEW
Next Previous 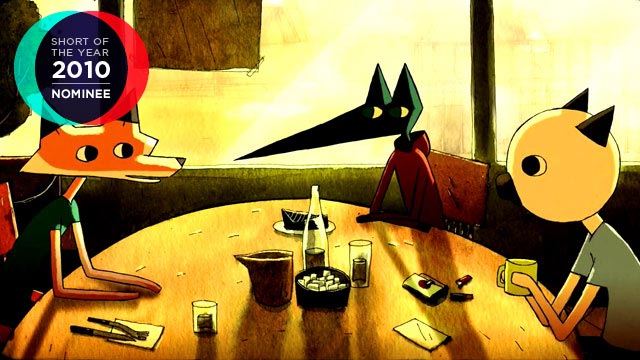 Part of the Sundance 2010 Online Short Film Program, which has been previously featured,  Old Fangs is one of the few selected shorts which still can be screened online. The film tells the story of a young wolf on a journey with two of his friends into the woods, trying to reconnect with his estranged, over-mighty father. In flashback scenes we see glimpses of the wolf’s childhood which let the viewers know what might have happened in the past that was the reason for the failed father-son relationship. Old Fangs is a short which is more style over substance, although in a good way. We don’t need much story, the images and the minimalist insights into the characters lives and their interaction are enough to leave the viewer with a lot to think about.

The animation technique used enables the filmmaker to craft images which remind one of the films of Terrence Malick, the narrative intercut with beautiful shots of the landscape and the innocent, yet at the same time, frightening woods through which the friends have to find their way. We see images of the landscape or leaves in the wind, and some shots of stop-motion-like animated nature photographs. Depending on the scene the filmmakers use shades of blue, red, green or yellow, almost never mixing them, using those colors to set the mood in each different scene perfectly. The powerful images are supported by striking music and the very sparse dialogue. What I find interesting is, although this is a short by Adrien Merigeau, the credits don’t list the director and his team with unique credits, instead showing us a long list of people accompanied by the credit “made by”.