A taut horror-thriller set entirely within an elevator, this short film from Vincenzo Natali (Cube, Splice), is guaranteed to keep you on the edge of your seat.
READ REVIEW
Next Previous 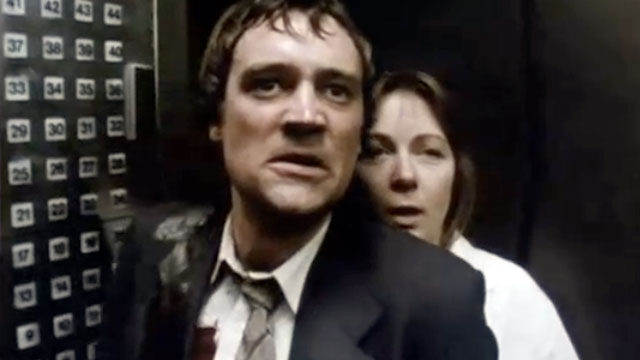 Featuring a short film directed by Vincenzo Natali is not part of some underground promotional blitz for his new feature Splice which hit theaters this past week. Believe me SotW is sadly independent. We’re waiting to sell out, just nobody is buying! No, this review and the release of the film are related, just in a perfectly mundane way; I liked Splice when I saw it recently at the Seattle International Film Fest and so I looked up Natali’s CV to see if there is short work on it.

Elevated is what I discovered and I find it to be a phenomenal short film. A taut horror-thriller, it employs a simple gimmick—the entirety of the film takes place on an elevator. From such a simple premise a remarkable amount of tension and horror is derived, delivered by a surprisingly diverse and dramatic shooting style in addition to excellent performances.

The film begins with a woman and a man sharing an elevator at the end of the day. They are going down when a building security guard joins them. Covered in blood, he commandeers the elevator and sets it to go to the very top of the building. From there a tense psychological battle joins, as the security guard—not the most trustworthy of figures with his manic, panicked behavior, tries to convince the credulous pair that going down is a REALLY BAD IDEA.

In moving on from Elevated, Natali has come to be known as an expert visual craftsman, and this film really shows the roots of that. There is a facility with space necessary to make such a concept work, and the entirety of the elevator car is utilized, from the high to the low, in ways that are sensible and non-show-offy.

More so though, I really enjoyed the look of the film. Made in 1997, I actually got a strong 80’s vibe from the soft light and desaturated colors. This is probably because it is so rare to see shorts shot on film nowadays, and the ones that are, still get digital color-grading. Something about the blue of the night shots glimpsed outside the elevator gave me this overwhelming nostalgia for the Terminator/Die Hard era of action filmmaking. The soft focus and blinding backlights of the finale sequence instilled similar sentiments.

For a director that is most associated with high-concepts, Elevated, and really all of Natali’s films, showcase fine acting. Truthfully Elevated is an actor’s piece, the artificial confines creating a stage of sorts, though the editing and directorial decisions add infinitely to the presentation. Still, it is a work unusually dependent on its acting, and the confined space necessitates many closeups of the actors, who fortunately really let loose and dig into their roles. There is a reticence I would imagine to screaming one’s head off in an elevator with a camera mere inches from you, and if that reticence came through the film would be sunk. However Vicky Papavs, Bruce McFee, and, Natali fave David Hewlett, really shine.

Splice may yet change this, but up till now Natali has been most famous for his debut feature, the excellent cult classic Cube. For those who know the film, the similarities are obvious. It is not made explicit anywhere I can find, but it reasons to think that Elevated was in many ways a proof-of-concept for that film, which similarly explored tense human relations in a confined space. Unfortunately, it doesn’t seem as though Elevated got included on any of the Cube special edition DVD releases. It would have made a nice accompaniment, and thus, this lower quality file from DailyMotion with French-hardsubs is our best option to enjoy this wonderful film.