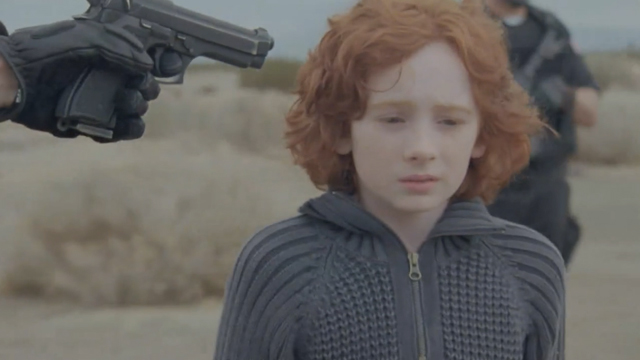 Nudity, foul language and truly extreme violence result in M.I.A’s return with the music video for Born Free, directed by Romain Gavras. We begin with a dawn pan across an undisclosed American city, before joining a geared up company of shock troops ready to execute a raid with the utmost prejudice. They bust doors, furniture and heads indiscriminately before dragging out their quarry, a ginger haired man, kicking and cursing from the building. At this point it looks like we’re witnesses to an over zealous terrorist raid or the like, that is until he’s manhandled onto a bus full of mutually ginger headed detainees. All are transported to an out of the way scrubland location, where they are given the non-choice of running through a minefield or dying where they stand. These are 9 minutes of musical promotion not for the faint of heart.

Specific subject matter aside, what grabs me about Born Free is that it’s first and foremost a short film with a message and a promo second. It seems that with a few exceptions from time to time, music videos have become happy to occupy the ground of band performance piece or clever visual feast centred around a single kinetic idea or a ‘how did they do that?’ wow factor. What Gavras does, with the assistance of André Chemetoff’s gritty camerawork, is very quickly build a full and worrisome world through an abstraction, which to some may feel heavy handed, but is nonetheless powerful, probably because we’ve seen these images ‘for real’ in rolling news coverage of places we don’t live.

In hindsight the marriage of Gavras with the politically engaged M.I.A was an obvious coupling. Gavras is a co-founder of Kourtrajmé, an art and filmmaking collective in Paris, producing projects focused on social provocation such as the 2007 documentary, 365 days in Clichy-Montfermeil, which explores the issues of the 2005 French suburbs riots. Gavras also directed a hooded gang on a rampage through the streets of Paris in Justice’s controversial Stress promo, which was equally effecting but not loved by all; “For a few months, I was one of the most hated men in France, but it was fun.”

Within hours of its posting Born Free was yanked from YouTube for its graphic content and M.I.A has herself been slammed with accusations of sensationalism or ‘violence for violence sake’, contradicting her well known anti-violence stance. However, it’s a stretch to brand the promo as gratuitous; from the track’s sampling of Suicide’s 1977 Ghost Rider (which originally contained the lyrics, “America is killing its youth”), to M.I.A’s defiant chant of “I was born free”, this is a well crafted video with something to say in the vein of Peter Watkins’ Punishment Park. Perhaps 12 year old actor Ian Hamrick (whose character is shot in the head at point blank range) best surmised the film’s anti-genocide message when he was door-stepped by TMZ; “I think she was trying to show violence to end violence”.

I was happy to hear that Gavras is extending the dystopian world of Born Free in his coming feature Redheads, starring Vincent Cassel in a tale of “two outcast redheads on a road trip of hate, violence, and self-destruction.” We’ll have to see if the subject matter remains as compelling over the longer duration.