An action-packed musical, flash animation about robots seeking revenge—prepare to be entertained.
READ REVIEW
Next Previous 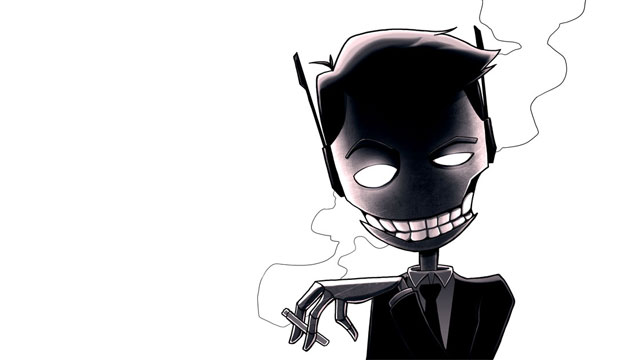 Here is the type of film we have the internet to thank for. It’s a film that, before online distribution, would have been relegated to a handful of small local screenings and not much more. It is not a film that major film festivals are interested in. It’s an animation, but not the multi-year disciplined work required for festival selection. And yet, it’s one amazing ride of entertainment—robots, explosions, strobing fight sequences, and an overly-excited grandfather.

Framed as a bedtime story, Tarboy begins with a grandfather robot telling little Billy robot of a time when greedy men ruled the world and forced robots to work all day. When robots began being dumped into landfills, the souls of the robots melted into the tar pits and were reincarnated as Tarboy—a boy made of a million robot souls seeking revenge. We follow his journey to his inevitable demise.

The visual style is fairly minimal. More flat than I typically care for, but the simple silhouetted shots work well. The fight sequence in the dark is just beautiful to watch and beautifully choreographed with the music. The use of language is great. It’s fast and rhythmic, at times almost musical, but it’s the small whimsical touches to vary the pace that I particularly enjoy (“Grandpa, you swore.” “Shut up, Billy!”).

Created by James Lee, Tarboy is a unique voice. James has absorbed pop culture, chopped it up, and served it back to us. And with over a million views on Newgrounds and YouTube, audiences are enjoying Tarboy. We focus a lot on deep, cerebral stories and sometimes forget there is also a strong draw toward films with interesting attitude and character that focus more on emotion than reason. Though we sometimes look down on it, I’ve seen enough interesting yet boring films to admit there is a talent to making something entertaining.

So far, this one short is the only Tarboy film, but James appears to be developing future installments. Keep tabs on Tarboy and James’s other adventures in storytelling at Tarboy.com.