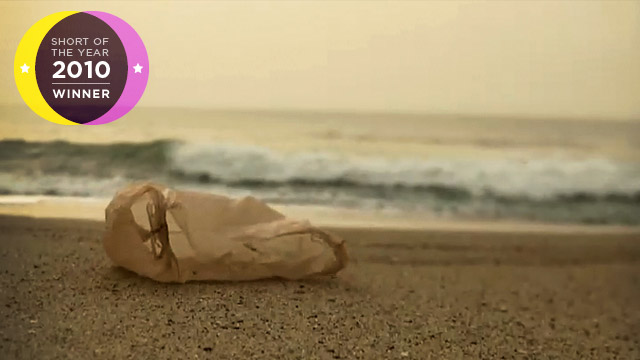 Ostensibly, Plastic Bag is an environmental film. That might raise a red flag for some, for whom the preachiness of “message documentaries” screams “BORING”. But despite the socially conscious message lurking within the film it is resolutely narrative, and, within that category,  dramatic and deft too, in its dramatization of the life cycle of a disposable commodity.

The film follows a wayward plastic grocery bag: sentient and voiced by Werner Herzog to amazing effect, as it searches for meaning to its existence. It is a heavy subject—existential angst—and in the form of a plastic bag’s personification, definitely absurd. However for the most part the film takes itself and its concept seriously, albeit with occasional breaks for wry humor. The result is a film that is a success as education and entertainment; one that musters a startling amount of pathos from its subject and a surprising amount of empathy from its audience.

Ramin Bahrani has developed quite a reputation on the basis of his three feature films: Chop Shop, Goodbye Solo and Man Push Cart, which all turn a humanistic eye to the American immigrant experience. This attitude coupled with his frequent use of non-actors has lead some to classify him as something of a neo-neorealist. Thus on first blush it is strange to see him tackle a high-concept work such as this. However the same skills that prove successful in his features buoy Plastic Bag: a broad and sympathetic understanding of interior worlds, and a photographer’s eye for natural beauty in the exterior world.

The script that Herzog works with, and his interaction with it are a triumph. The charming foreignness of his Germanic handling of English is endearing, and establishes Plastic Bag as sympathetic in its naivete. It is the same trope of the good-natured but confused traveler which allows films like Coming to America or Borat to succeed. It also allows for subtle and wry humor to break up the oppressing sadness of the piece. The bag’s recurring use of “monsters” to address non-human creatures is reliably funny. It additionally mines powerful archetypes of quests and journeys. His long attempts to find home slowly morph into a goal of discovering “the vortex”. Language is key here and serves as a testament to the script. The plastic bag prophets, “preaching” of the vortex, are powerful myth-making elements.

This outsider approach, while investing us in an all-too-human story, subtly reinforces the ecological undercurrents of the film. Via a process of estrangement, Plastic Bag allows us to see, through the plastic bag’s experience, our own world via new eyes. A world, eventually, without humans at all.

This investment in an inanimate material’s subjectivity can be accused of bordering on manipulative. However is it any different than Wall-E, another film with a similar environmentalist message? Perhaps the difference is the medium—the animation of Wall-E necessarily puts us at an additional remove, pushing us closer into the more comfortable embrace of fantasy. Bahrani’s cinematography, however, revels in the real via picturesque landscapes of skyscrapers and plains, and closeups of fishes and beaches. Either way the imagery is quite lovely, serving up a engaging mix of artfully composed long shots and closeups with dreamy-soft shallow DOF.

The beauty of the images buttress the interior journey of the bag, reflecting its mental state in nature. Yet like the script itself, these images serve the dual purpose of engaging the ecological message through its simple and dramatic representation of our world. An elegy for what is ours, and, in the story, what it is we will eventually lose.

The best entry of Future States, a whole series of films commissioned by ITVS, Plastic Bag is a confident and polished piece of art that successfully navigates these two simultaneous threads: the interior and the exterior, humanity and nature, the particular and the environmental. It accomplishes both these angles with aplomb in a quite moving whole. I very much like this film and hope you take the time to enjoy it as well.