A recent Oscar nominee, an absurd crime reveals itself as a poignant ritual for a family in post-Chernobyl Ukraine
READ REVIEW
Next Previous 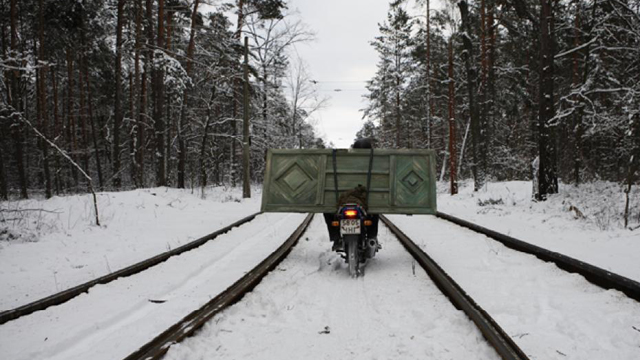 Depending which culture, society or religion you belong to, or even which books you read, the door can symbolize many different things. A locked door may represent a missed opportunity, whereas an open door can symbolize a new opening or a fresh beginning. In books or films, the door can often be seen as a portal to another world, another universe or another reality.

The Door is a universal symbol of life, of death, of entering the next life. It has many associations inherent in it, both positive and negative. It can mean an opportunity gained or an opportunity lost: As one door opens, another one closes… (from the website).

Based on Monologue About a Whole Life Written Down on Doors, the Testimony of Nikolai Fomich Kalugin by Belarusian journalist Svetlana Alexievich, Juanita Wilson’s poignant, emotive film begins with a very simple act, the stealing of a door. However, as the film progresses and the narrative unwinds, we discover this act is far more complex than we could have initially imagined. The door is in fact a vital part of a traditional ritual, carried out by a grieving family in the aftermath of the Chernobyl tragedy.

Written and directed by young Irish filmmaker Wilson, yet filmed in the Ukraine (in Pripyat, a city described as the most radioactive place on earth) and featuring regional actors speaking in their native tongue, The Door truly is an ambitious project. Thankfully, the ambitions of the filmmakers are matched to the rewards of this richly captivating, heartfelt short. The film is beautifully shot, with Director of Photography Tim Fleming taking exceptional care over the composition, camera movements and colour palette of every shot. It’s a remarkable achievement that the cinematography team of this production managed to create an aesthetic that works in tandem with such a commanding narrative.

Credit can’t only go to the visual team however, as The Door is also masterfully scored and powerfully acted. Brian Doyle’s music could have so easily been over-dramatic and distracting in trying to compete with other aspects of the film. Instead it gentle accompanies Wilson’s short, softly entering at all the right places. Being a film of little dialogue, its success was always going to quite heavily rely on the actors’ ability to portray emotion through body language and facial expression. As the couple going through an unimaginable grieving process and a drastic transitional period, Igor Sigov and Juliette Gering, do this perfectly, with their vacant stare and furrowed brow saying more than words ever could.

Winning an Irish Film and Television Award in 2009 and an Academy Award nomination in 2010, Juanita Wilson’s directorial debut is gaining the critical acclaim that a film this well made so rightly deserves.

With a feature film, As If I’m Not There, currently in post-production, Wilson’s directorial career is one I’ll be keeping a close eye on.