What happens when you mix zombies and beer? You get a seemingly unstoppable way to spread a zombie virus.
READ REVIEW
Next Previous 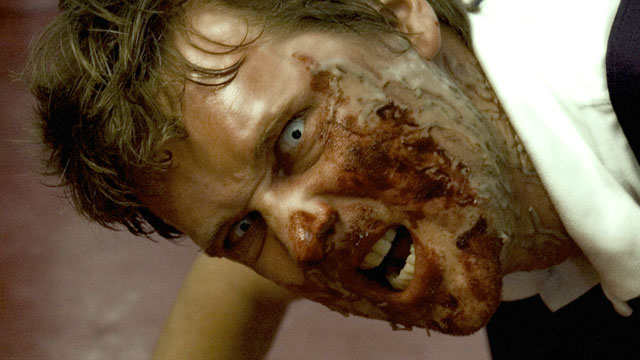 Zombies and beer. Why has no one thought of this before? Peanut butter and jelly. Hope and Crosby. And now, zombies and beer. Leave it to the Dutch, masters of brewing, to fill in this gap in modern society.

The plot is as complex as you would expect (or desire) from a beer-based zombie film. A drunken brew master has embarrassed the brewery for the last time, being exiled to the lonely late-night shift. He hasn’t let this setback interrupt his drinking, and while looking into a vat of… OK, let’s not over think this. We all know that beer turns guys into zombies, right? That’s the plot. Done.

Co-writer/director Rob van der Velden approached internet fame with his winning entry into Quentin Tarantino’s fake trailer competition (Dutch edition), Nailed by Nikita. Fitting with the tone of the faux trailers in Tarantino and Rodriguez’s Grindhouse, Nailed by Nikita introduces the touching tale of an abused, often naked woman, with a nail gun. God how I love nail guns. Van der Velden upped his game, with help from de Voogd, for Zombeer, surpassing the production values of most genre features, as well as almost everything which airs on the SyFy Channel. The last is pertinent because Zombeer screened on that channel, and was also nominated for their Shocking Shorts Award.

I suppose you could find some political commentary here, or a statement about alcoholism, but my mind never wandered into the land of deep meanings while watching drunken zombies take a bite out of tourists. Sure, it’s hard to become emotionally involved as the film never picks a character to focus on. And yes, it could be a more complete story and less of what feels like an intro to a larger work. But it is already delivering zombies and beer. To ask for more would be ungrateful.

Since Zombeer could stand in for the definition of “guy” film (definitions with words in them are way too feminine), don’t watch it alone. The Super bowl is nearly upon us, another stereotypically masculine bit of entertainment. Set out a few twelve packs, and make sure you have at least a case of Dutch brews chilling. Order up a few pizzas, and before the big game, start off the afternoon with Zombeer. Nothing could be more fitting.