The Tale of How

Telling the story of an island of dodo-like birds terrorized by a malcontent octopus who relentlessly devours them, this work by the South African collective, The Blackheart Gang, is unabashedly fun and yet indescribably odd.
READ REVIEW
Next Previous

The Tale of How 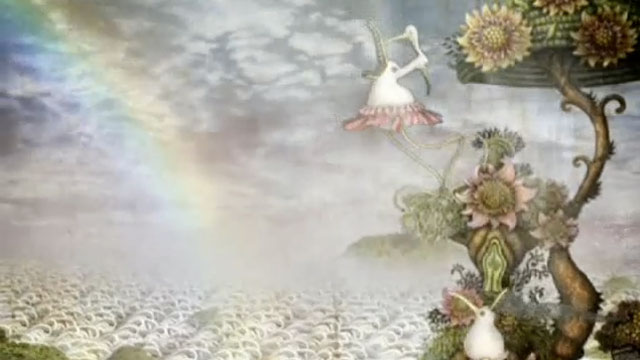 The Tale of How is a digital marvel of the handcrafted aesthetic. The visuals bring to life incredibly detailed and fantastic tapestries influenced by Bosch, Japanese Prints and Surrealists, via 3-D modeling and texture shading. Telling the story of an island of dodo-like birds terrorized by a malcontent octopus who relentlessly devours them, this work by the South African collective, The Blackheart Gang, is unabashedly fun and yet indescribably odd.

The Tale of How is part two of the Dodo Trilogy. Forget for a second that there is neither a part one or part three, the team is operating on an epic vision which I can appreciate. Despite that, the film exhibits a silly and light touch. The mundane names chosen, “Otto” for the octopus and “Eddie” for the savior mouse, coupled with the stoner-ish vocal delivery of Eddie, provides an element of child-like fun to the proceedings, though children might very well be alarmed by images of the dodos being torn apart front and center onscreen.

Speaking of vocals, as distinct as the visual style is the operatic delivery of the story’s narrative. My initial reaction was dismissive—hokum, and difficult to understand hokum at that. But the short runtime of the film allowed me to immerse myself in visuals the first time, and then listen closer to the lyrics the second time. Under closer inspection I realized they were well written if nothing else, and the idiosyncratic deliveries, themselves a slight mockery of operatic forms, were done well enough. The crew has published the lyrics online if you have a curiosity in deciphering some of the more opaque passages.

First coming out in 2006, the film has found many fans, playing the festival circuit, winning a prize at Annecy, as well as touring with OneDotZero and the much-missed ResFest traveling tours. Motionographer and Dek, who also has posted a “making of” vid, have previously featured the film. To capitalize on the popularity the filmmakers have put up a book for sale, featuring original artwork and some lovely prints, along with a DVD copy of the film. I am quite a fan of this approach. Though a little rich for my blood at $50, I think the secret to selling digital content is to package it with non-digital content that appeals to fans, and the book certainly looks lovely, and the quality of our linked Vimeo file is certainly a little lacking.

The directors have repeatedly hinted of a prequel emerging soon for this film, we’ll keep you updated if and when it surfaces. Until then, there is the 2009 United Airlines commercial the team did, which is of a similar, marvelous aesthetic. I cannot believe this actually played on TV!