Tragic story of a dog's trail through abusive owners told through a series of cascading flip books.
READ REVIEW
Next Previous 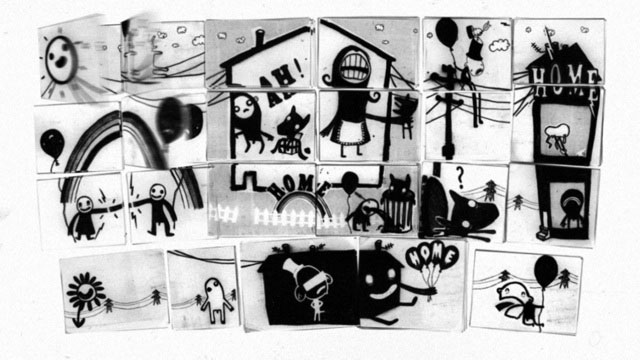 I first came across the work of Central St. Martin’s graduate Stephen Irwin back in 2005 with his piece Dialog (2004). Despite being his first animation, Irwin had already developed his black & white with a splash of colour, comicesque multi-panelled style of presenting a full narrative within a single multifaceted frame, “I didn’t want to simply fill the screen with single shots, but instead fill it with a number of micro-narratives that form a montage of shots and scenes.”

It’s good to see an evolution of this technique present in his latest piece, The Black Dog’s Progress. The film opens to the disquieting strains of Sorenious Bonk’s score with a single repeating flipbook panel, surround by soon to be populated white space, which depicts the Black Dog’s arrival in a gift box. His new owner promptly sneezes all over him and to say that this is as good as things will get for the Black Dog would be the understatement of the year. Animation or not, this certainly isn’t one for the kids! As the panels appear and shift to make room for each other, we’re presented with an interconnected mosaic of abuse and indignity piled on our four legged friend that belies the pleasant cartoon style of the drawing (somewhat reminiscent of the transformed creatures in Shynola’s promo for UNKLE’s An Eye for An Eye). At its height, the frame contains 24 flipbook panels of action, which your eyes continuously flit around in fear of missing something. However, Irwin quickly focuses our attention with a spotlight that guides us through the gruesome tableau.

Using inspiration from William Hogarth’s A Rake’s Progress (1733) as a jumping off point, The Black Dog’s Progress was originally conceived as an online commission for Animate, which Irwin has said influenced the development of the concept as he envisaged viewers being able to “explore the narrative and scrub through the timeline at their own pace.” After designing the multi-frame layout and deciding how each panel would interact with its neighbours, Irwin created 50 physical flipbooks (with additional variants as needed) that were then scanned to create the animation.

As disturbing as it is, The Black Dog’s Progress is a short that demands repeated viewing, inviting you to return time and time again to marvel in the decent of its protagonist, as if you were the one forcing him through the pages of his story.