A dispassionate master of the stage is brought to see the magic around us every day.
READ REVIEW
Next Previous 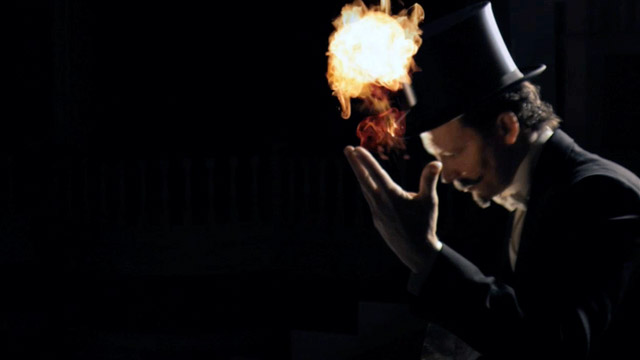 A dark Dickensian set reveals a street singer welcoming us into a world so close to ours, but where the deepest meanings of life are sung.  Oliver?  Sweeney Todd?  The short That’s Magic! sits between those two and could, and should, be played with them should any theatrical revivals pop up.  The design is as beautiful as the second, while the themes are as clear as the first.

That’s Magic! is a fifteen minute musical, not a music video.  It is a touch surreal, but not incoherent.  The story is slight, but that is generally the case with feature musicals, so is not a detriment here.  A janitor takes his son to meet “The Magician” in order to feel a bit of magic, but the performer is a sad cynical man whose depression manifests as soon as the curtain closes.  He has no magic to show, and no belief in it.  Left alone in his misery, The Magician dwells on the futility of existence, but a mysterious muse emerges from the shadows to guide him to true magic.

The power of music, and thus, the musical, is to summon up emotions without lengthy narrative or the need to deal with the distractions of life.  Yes, life is complicated, but the basic truths of life usually aren’t.  It’s in the paths to those truths where twists and turns exist.  That’s Magic isn’t interested in twists.  Its point is clear, pure, and in your face and summons up the likes of The Wizard of Oz, where there is no mistaking what is being said.

Of course such crystalline certainty only works when the music can sweep us along and here That’s Magic! excels.  For the modern show-tune enthusiast, this is as good as it gets.  Nickolas Kirk and Billy Wilkerson’s songs are rich and unforgettable.  Let’s hope you don’t mind a tune bouncing about in your head for days, because the only way the title song will vanish from your mind is when it is replaced by another, Second’s Glance.  The performance quality matches that of the songs.  The singing styles are more reminiscent of Moulin Rouge! than Seven Brides for Seven Brothers—this is a modern musical after all.

Director Brandon McCormick has created a must see fable: fabulous in its look, intoxicating in its sound, and a treat for whatever senses are left over.  The first time I watched That’s Magic! I enjoyed it.  The second, I was brought in deeper.  The third, I was captivated.  After twenty viewings, I like it even more.  It will grow on you.  Seek it out, and let it.