A dark, animated fantasy pulled off with style and panache. The Musicians of this cat-town have disappeared, sacrificed to the infernal Cat Piano. Our world-weary hero must fight to get them back.
READ REVIEW
Next Previous 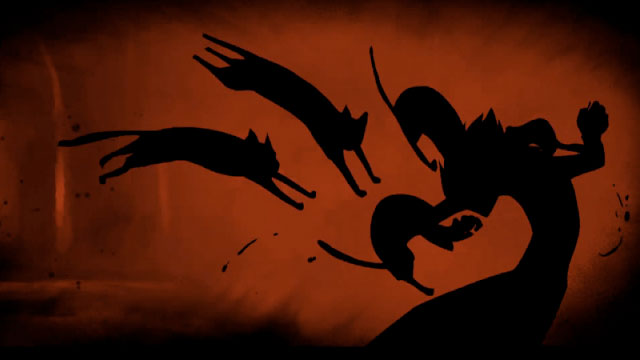 For my money one of the more remarkable animations I have seen this, or any other year, The Cat Piano is a visual marvel that is perfectly executed narratively, and seamlessly coalesces its influences into a confident aesthetic never at odds with itself.

In the film, anthropomorphic cats reside in a swinging town reminiscent of Casablanca. Music is the community’s pride and the solace of our world-weary hero; a loner cat of a literary inclination, who doubles as our narrator. One by one though the musicians and singers of the town disappear. Utopia transforms to dystopia, and our hero uncovers the root of the disappearances: a malevolent force is bent on creating the most horrific of all instruments—the Cat Piano (a real thing!).

Analogies are always helpful in relating the qualities of a film. Already I have referenced Casablanca, so I  will attempt to continue in this mode. In tone, imagine if you would the slightly gothic fantasies of Neil Gaiman.  The vocal stylings of Nick Cave as the main character proves an inspired casting choice in this vein. Rather than Mr. Gaiman’s proclivity towards the Romantic poets though, writer/director Eddie White finds inspiration in Kerouac and Beat poets. Arrhythmic rhyming and chewy alliteration color our hero’s retelling of the town’s travails, annoying some commentators on the internet so far, but adding a necessary element to what would otherwise be ponderous recap.

Visually I do not think I am qualified to deconstruct the influences on display, and this is what I meant the most about a confident aesthetic. An anime styling is certainly seen in the character designs: our heroes gangly body and heroine’s humongous eyes,  the villain’s otherworldy visage and the deliciously imposing mechanical construction of the Piano.  The work of someone like Tartakovsky though is easily perceived as well, the dramatic, graphic contrast between light and dark that described so much of his best work on Samurai Jack.

But some elements are wholly unique. The vignetting of almost every shot, a fierce glowing brightness emanating from the characters themselves receding to black on the edges; rarely if ever using all the real estate available in the chosen 2.35:1 screen ratio, is a stylistic choice that pays dividends, serving to selectively focus audience attention, and accentuate the hypnotically sinister air permeating the short film.

The People’s Republic of Animation is the studio which produced this piece. Based out of Australia, they have been on my radar since they produced Safer in a Wild World, a spot for the Mitsubishi Lancer. While cute, it did not lead me to suspect that this kind of storytelling was something they were capable of. It seems though that their aggressively multi-platform philosophy of working through shorts, commericals, tv and video games, has paid off. Sometimes we celebrate works for their roughness, a hint of the process and the work involved, evidence therein of a blossoming talent unfolding like a newborn fawn which exhibits beauty and grace on those wobbly legs. The Cat Piano is in contrast a mature work, the kind of refined piece that can only be earned through trial and mastery. This is a superlative short by any reckoning.