A harsh breakup served up with a side of brutal honesty and a walking, singing heart that will have you saying, "That's so true."
READ REVIEW
Next Previous 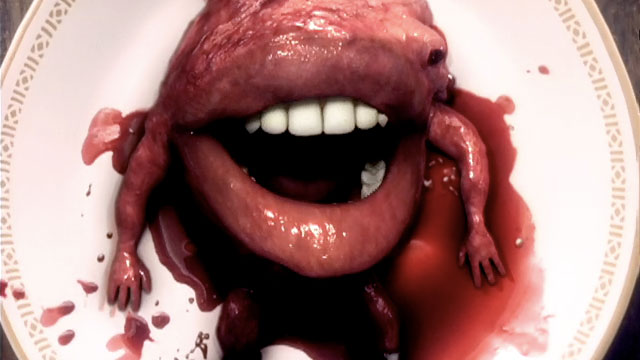 A guy and a girl sit in a dinner talking. Pretty much straight away we realise it’s ‘that’ conversation; “It’s not you, it’s me…It’s just time to move on now…etc”. It’s the girl leaving the boy, but he’s talking it well, handling it like a man. He even manages to order an extra plate without betraying his aching heart. His aching heart that he then cuts out, places on the freshly arrived plate and calmly explains that this is it for him; she’s ruined any future chance of love; he has no use for the organ from now on; it’s hers. The heart agrees and it sings the mournful words of Gnarls Barkley’s Who’s Gonna Save My Soul whilst the staff and diners look on sympathetically.

It’s a genius piece from the much lorded music promo and commercial director Chris Milk, that manages to play the sureality of the action completely straight so that not for a second did I fall out of the film to think, “Hey wait a minute???”. The scripted lines of rejection clichés could have been plucked complete from 50 Ways to Leave Your Lover, yet are delivered by Aasha Davis with a sincerity that banishes the irony those phrases should conjure. The deadpan, measured reactions and matter-of-fact delivery of Jorma Taccone are the perfect conterpoint to the bizzare direction the film moves to and helps to anchor it in an askew reality I was more than happy to go with.

The heart of our rejected lover was brought to bloody, crooning life by Keith Sintay whose efforts were rewarded with a D&AD Yellow Pencil Award for Music Video Animation (2009). Milk was also awarded 2008 Music Video Director of the Year by the Music Video Production Association.

It’s been pointed out in the comments over at Antville that Milk’s film bears a resemblance to Adam Lieber’s video for the Charlie Alex March cover of In The End (2007) and Suthon Petchsuwan’s Follow Your Heart CareerBuilder ad spot (2008). Even if Milk was inspired by these pieces (he wasn’t: “This Gnarls video I’ve pitched to 3 or 4 bands over the years.” via Globecat) it’d still be safe to say that he put the concept to its most effective use.