In this Oscar-nominated short film a young boy is caught on the wrong side of the India-Pakistani border. The film presents the common humanity on both sides as well as the danger in the middle.
READ REVIEW
Next Previous 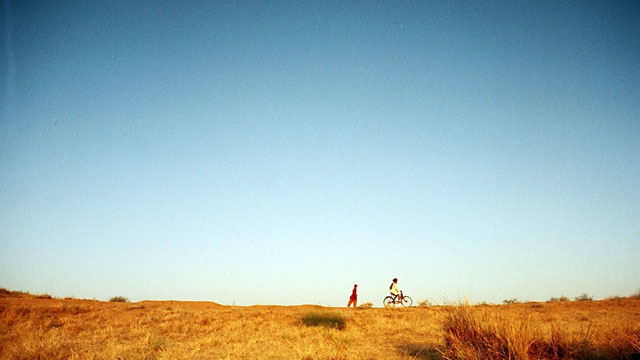 Little Terrorist is a film whose solid production values and ethnographic details elevate a rather formulaic story. Jamal, a young Muslim boy in a Pakistani border town, crosses into an Indian minefield after the village cricket ball passes through the barbed-wire fence. Hunted by border security, he encounters an Indian Brahmin. From there a classic moral conflict arises–should the man help the boy evade security, or wash his hands of him?

What I liked was the professional look and feel of the piece, which was accomplished famously through a volunteer crew recruited from the “Shooting People” online film community in the UK. Ashvin Kumar, the director, was a student at a London film school but dropped out, and there is a decidedly Western sensibility to his style. At the same time he is comfortable incorporating Indian crew and non-actors into the work,  and with shooting in remote areas of Rajasthan, such as he did with this short film.

This leads to a cinema-verite approach that I enjoyed, as the details of village life are documented in a standard continuity style, but with little artifice. The risk of the film is that in celebrating a one-world, one people agenda it collapses real and troublesome difference. To fight against this tendency, minor, unexplained aspects of the characters interactions–the issue with the plate for instance–are included to highlight the very real cultural-religious divide between these two countries which had been one, without diminishing the ultimate message of the short film.

Little Terrorist is part of the relatively recent trend of British-Indian film collaborations that should only grow more in the wake of Slumdog Millionaire. Kumar’s Indian background puts him in a good position to capitalize on said trend, and hopefully influence Indian filmmaking as well. Alluded to somewhat in this interview with Kumar, India, though well documented as the most prolific filmmaking country in the world, does not have much of an indie or art-house cinema per se. Formulaic offerings from the dominant production houses out of Bollywood are unusually dominant. An Oscar is a big deal though, and I’ve read more than one article about how the 2004 nomination of  Little Terrorist coupled  the rise of India’s middle class and the falling price of digital technology has stimulated a growing experimental and short film culture in India. I look forward to seeing the fruit of that in the future.

Note: There is about 30 seconds of black header in front of the google video file.