The Most Beautiful Man in the World

At a major moment in her life, a young girl encounters an unknown man outside her house, in this ambiguous, poetic film.
READ REVIEW
Next Previous

The Most Beautiful Man in the World 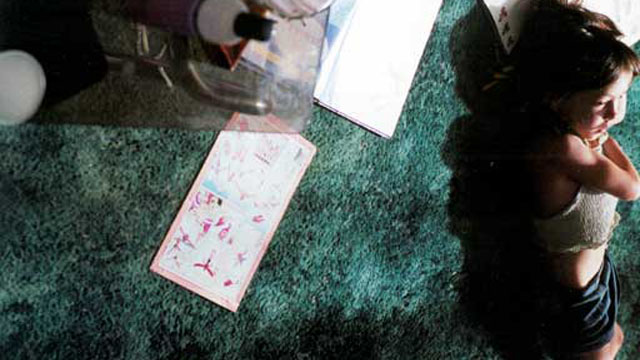 This week’s short film is short and on the surface slight to a point almost beyond belief. In that regard it is a film that does not appeal to everyone, a film based on atmosphere and poetics, where ambiguity reigns, and what is unsaid speaks volumes. But if you have come to understand and appreciate some of my predilections regarding short film,  you will agree that The Most Beautiful Man in the World is a remarkable film.

A young  girl watches TV, her mother absent. Edits imply a great passing of time. She sleeps some. She suddenly goes outside with her dog and after some exploring in the middle of a batch of tall grass, she meets a man. They share a charged and intimate moment. He touches her, picking off a small bug on her shoulder which he places in her hands. Across the field is her mother dishing out an icy glare. The girl walks back to the house. That is the film. It is up to subtext and beauty to give life to the experience: the ennui of a girl ignored, the simple joy and wonder of the outdoors and its unmediated experience,  the power of the man’s unflinching gaze. I cannot believe he is a stranger. The mother’s reaction is confirmation of as much. Suddenly an untold backstory fills in the edges of the picture. A story of love and loss, or maybe mistakes and regrets, a story that gives context to little innocent girls abandoned and ignored. The details are left to the viewer to guess, but their absence makes the film richer for it.

It is impossible to describe the grace of this film through words, but that’s why we link to the video as well. As it behooves me to try, I will start with the fact that is shot in 35mm using the ultra-wide 2.35:1 ratio. Great care is given to the cinematography, the caressing light of the television screen, the excellent focus pulling, all of which lends the seemingly ordinary events a sense of cinematic grandeur. Would have loved to have seen this on the big screen. The second technical element that deserves highlighting is the sound design. The outdoor scene is wonderful with the soft sounds of the wind, the birds and the bypassing cars. They help add to the lazy Sunday languor of the piece, yet rather than be mere background they draw you into an immediacy of the moment,  sharply attuning you to the vibrancy of a place and time. The care and attention to the details in both image and sound is not merely stylistic, it places us into the mind of the young girl, simultaneously oblivious and yet hyper-aware,  providing us with the vividness and romance which so often are the lasting hallmarks of momentous encounters for lives so young.

Alicia Duffy, where are you? Produced in 2002 by Breakthru Films, the company that produced Suzie Templeton’s Peter and the Wolf, and with help from the UK Film Council, this professional-quality production succeeded in its goals, winning a BAFTA nomination and playing Cannes. Yet it is the last entry on Ms. Duffy’s IMDB page. As designers and animators are increasingly taking over creative aspects of film, overwhelming us with advanced editing techniques and increased computer intergration, this is a calling card for a filmmaker who knows how to tell a story visually, with patience, space and emotion—the exact kind of qualities which I feel could use a comeback. So Alicia Duffy, please direct again.