A team of mini-skirt clad crime fighting women take on evil in this Sundance favorite.
READ REVIEW
Next Previous 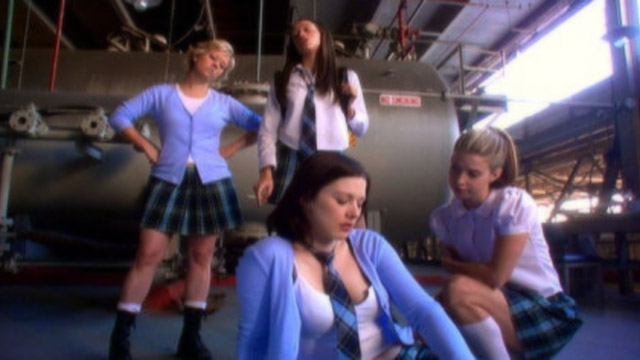 Just a little something to get you through the weekend. D.E.B.S is a classic LGBT short that’s fun instead of weighty. Made in 2003 right in the middle of the Charlie’s Angels resurgence, this cute and clever spoof featuring a team of young and dangerous females clad in plaid mini-skirts stormed Sundance and won its director, Angela Robinson, the chance to make it into a feature- 2004’s identically-named D.E.B.S.

Of course, as many commentators have pointed out, it’s hard to spoof a series like Charlie’s Angels which doesn’t exactly take itself seriously in the first place. Therefore the lesbianism ends up taking center stage as the raison d’etre. Still, it’s pretty funny all the same, and if the internet has taught us anything, it’s that beautiful women making out is quality entertainment for all. It sports some nice camera work and was shot on 35mm, though unfortunately the quality of the encode is dreadful. Sorry! If you end up liking it a lot and want better, it’s on a DVD compilation.