Jojo in the Stars

Love traverses all obstacles in this award-winning animation about a circus performer and a lone admirer who hopes to free her.
READ REVIEW
Next Previous

Jojo in the Stars 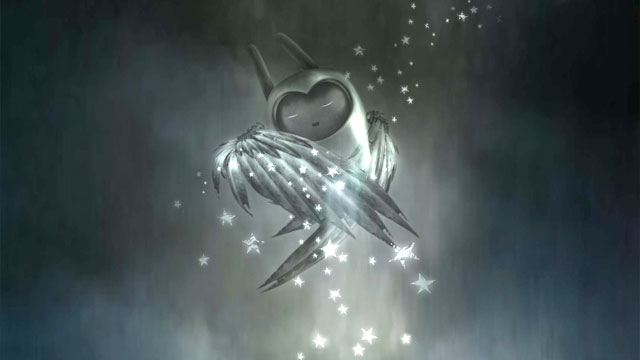 Animation can create worlds and characters that often seem unimaginable and unbelievable. However, the best animations always seem to revolve around the most universal and recognisable of themes.

In Marc Craste’s strikingly original animation Jojo in the Stars, the nightmarish, freak show world he has created reminds me of what might happen if Lynch and Burton ever decided to make a film together (in fact Craste evens proclaims Eraserhead as one of the inspirations behind his filmalong with Wings of Desire).  It’s rare to see an animation in such a desaturated form, but the colourless aesthetics of the film adds magnitudes to the industrialized carnival location of the film, whilst also giving its characters a dark, tragic edge. If Jojo would have been in colour, it’s hard to imagine how the characters wouldn’t have been cute and lovable (ok maybe not Madame Pica) and this would have inevitably distracted the focus from the story at the heart of this piece.

Although the visuals of Jojo will almost inevitably be what the majority of its viewers remember and remark upon, it is the narrative of the film which takes it to the next level. A heart-breaking tale of love, isolation and self-sacrifice, Jojo tells the age-old story of how far one robot-bunny-thing will go to try and set free the silver-plated, owl-like, trapeze artist he has loved from afar. Although set in a twisted, strange world, very unlike the one we live in, the story of Jojo feels like it could come from any book or any film set in any time or any place.

Craste stated that he wanted to create a a love story with freaks, and that’s exactly what he’s done in creating a cold, nightmarish world, filled at its heart with a universally touching story of warmth and devotion.