A young time traveler is confronted by an arrogant and hairless future version of himself—the winner of Short of the Week's Gut Check Competition.
READ REVIEW
Next Previous 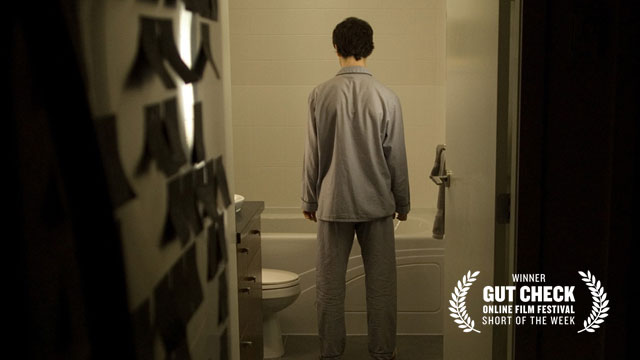 Sci-Fi about Transformation in Live-Action
Directed By A.J. Bond
Made In Canada

This past month we tried something new and decided that instead of busting our asses looking for the latest and greatest on the web we’d see what you were up to. We asked you send us your own films which you’d placed online, and we’d post the best one.

Well time’s up and the favorite is…drum roll please. The winner of the inaugural, reader-submitted, Short of the Week: Gut Check competition is…wait, you can already see the title and picture? Oh. You saw the blurb too then? Hmm. Damn that’s anti-climactic. So yeah, its called Hirsute. It’s written, directed and acted in by A.J. Bond, a good-looking and talented young Canuck. Yes it has time travel in it. What you don’t know yet though, (unless you skipped ahead and watched it first I guess…) is that it’s awesome! A.J. and his crew dazzled us by nailing just about every aspect a short film needs to succeed.

A.J. plays a young scientist working on uncovering the secrets of time travel. The reams and reams of equations that decorate his apartment scream obsession, though the pleasant background music and warm lighting keep us worlds away from Aronofsky’s Pi. Indeed the early tone of the film is pleasantly light, gliding along smoothly on the back of witty comic banter. A.J. Bond as an actor it turns out has extraordinary onscreen chemistry with A.J. Bond.

That is a spoiler, but it comes soon enough into the film to justify sharing it. The young scientist is confronted early on by his future self: the “hairless, arrogant” one of our teaser caption. He has yet to develop time travel himself, but figures he can rely on his future self to arrive and tell him how he did it. Yes, yes, an ontological paradox. Back off nerds! Bond resolves it well, having the arrogant self clearly delineate the essential difference between the two inventors, past and future. This lays the foundation for rest the film, which touches upon issues of identity and desire in ways that are impossible to predict. The utter lack of cliché is definitely an endearing aspect of this short.  It is also smart. It is not self-consciously clever, nor deliberately obtuse, but it pays to pay attention during the opening scenes and at least understand why the film begins with the same sequence twice.

Earlier I proclaimed that Hirsute displays excellence in all aspects of short filmmaking. That’s not hyperbolic praise. I already saluted Bond for the writing and thoughtfulness of the concept, but the production side of the short film excels as well. In scope it is is reasonably modest—one actor, one set—yet the acting is good, the set design slick, and the cinematography is pretty. Prop design in the form of the “egg” is neato as well, and some ingenuity certainly went in to the process of duplicating Mr. Bond for the camera. Credit certainly goes to the whole crew and especially Ms. Belling, Bond’s production partner in The Siblings, and DP for Hirsute.

Yet this is Bond’s film, and in it he displays an embarrassment of talent, handling the writing, acting and directing duties. Looking through his credits on the Hirsute site, it is remarkable that his most notable past film experience happens to be in editing, the one challenge he bypassed on this film. All that and a willingness to sacrifice for his craft! Lest this cease to be a review and degenerate into some sort of awkward love letter, I should share a quibble. Character, and yes, logic, bend in the service of plot. While the recognition of difference in the inventor’s past and future self is terrific, the motivations of the future self and the reasons for his transgressions are completely undeveloped. While pleasing in terms of shock value and instrumental in setting up the the film’s twist ending, taken on their own they stretch plausibility. Still the richness of the setup does reward viewer speculation into these motivations, and I have some theories myself. I encourage viewers to share some of their thoughts in the comments.

All in all, Hirsute is a tremendous directing debut for A.J. Bond and we here at Short of the Week are extremely happy to have had a chance to showcase it and bring it to all your attention. Watch for an interview with Mr. Bond later in the week, and thanks once again to everyone who participated this past month!