Day follows night, follows day, follows night. That is until the natural poetry of motion is thrown out of sync by mechanical failure.
READ REVIEW
Next Previous 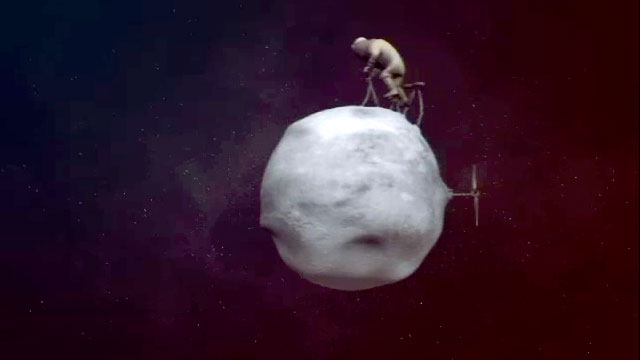 Day follows night, follows day, follows night. That is, until the natural poetry of motion is thrown out of sync by mechanical failure. And so starts Solar, the Cumbria Institute of Arts graduation film from newly formed creative team Ian Wharton and Edward Shires.

Animators at the start of their careers are often seduced by the burning desire to strut their stuff, showing off their talents with the whizz bang of a preening peacock, but thankfully Solar is the antithesis of any such showboating. That isn’t to say the film lacks style, but rather that the duo have chosen to place their storytelling prowess at the forefront and supported it with a believable world that works across every dimension.

Apparently Solar went through 20 script re-writes and numerous design tweaks before the machinery was locked down, so the sun-moon cycle became a valid and logical system that behaved in a believable manner. With such a solid base, the physics of the world are easily stretched, to include the giant throwing the controller into the heavens so he can pedal a moon back to base when the mechanics fail -and so begins the cycle once again.

In a world of spoon-fed stories it’s to Wharton and Shires’ credit that we can latch onto Solar’s narrative without the need for a single word of dialogue, although credit should also go to Simon Koudriavtsev who provides the emotive score for the piece.

Solar has understandably racked up a host of awards and nominations including Best Animated Film at the Royal Television Society Awards, a Student Escape Award in CG and Best of Show at Cubria’s graduate exhibition. Also, for those of you curious for a peak behind the curtain, the Solar site hosts a pretty detailed making of video along with concept art for the film.