Mankind Is No Island

Shot by cell-phone on the streets of New York and Sydney, Mankind is no Island stitches together words from posters, displays and street signs—to create a poem of breathtaking beauty and emotion.
READ REVIEW
Next Previous

Mankind Is No Island 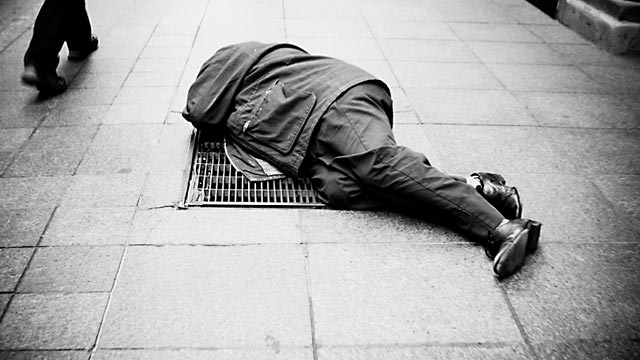 I was about halfway through writing a review for a fine film, one of the best I have had the recent pleasure to see in fact, when I stumbled upon an interesting piece of news. TropFest NY has just recently concluded. Well I’ll be. I didn’t even know there was such a thing as TropFest NY!

Evidently Tropfest NY started in 2006 via a partnership with the Tribeca Film Fest and this was its second year as a stand-alone event. Not too long ago I extolled the virtues of the original Australian itineration when I reviewed Marry Me the winning film from this year’s event, so I was excited to check out what I had missed with TropFest NY. I hopped online to watch some entries, thinking I could stockpile some worthy films to add to the review queue.

Or that was the idea at least. I made the mistake of watching the festival winner, Mankind Is No Island, and half-finished review or not, I knew it had to be this week’s entry. Simply put, no film has moved me half as much in a long time.

Mankind Is No Island is 3min30 long. Go watch it now, because a conventional description does not do it justice. Nor does trying to pigeon-hole the film for that matter. It is an interesting conglomeration of genre types, and few of those types really are film-related at all. In relying on the written word to tell its story, it is more properly a poem, though surface comparisons to all those typographical exercises one sees on Youtube can be made. Certainly the arrangement of the title-cards betrays someone with a design background, yet really almost the entire film is composed of near-static shot compositions. Is that not fine art photography? If we ignore technique in favor of intention, perhaps it is best thought of as a documentary for social change.

Trying to intellectually grasp the film is ultimately a pointless exercise in the face of the awesome power of experiencing it emotionally. It is devastating. I am not faint-hearted, my girlfriend will attest to that, but the film invariably summons a tear every time I view it. Part of this of course is the subject—homelessness is undoubtedly a tragedy—yet it truly is the construction of the film that most elicits these tears, starting with the score. John Roy provides it and it is spare and melancholy and beautiful. So are the images, all of them taken by cell-phone. The backlighting of “Hope” is gorgeous, the shadow falling across the last “Me” poignant, the child and mother street sign, heartbreaking. And let’s not forget the poetry of the message itself. If it was clumsy, preachy or overbearing, the film would be easily sunk. Thankfully that is not the case, and all these factors interplay in what is a powerful piece of filmmaking.

Jason Van Genderen is the toast of New York right now. Congratulations, it is well-deserved. Mankind is No Island is a triumph. A bunch of famous people made short films starring New York for New York, I Love You which premiered this month, and this one will be better than all of them.