The brilliant Miyazaki brings to life a beautiful story of two small heroes and their pursuit to free a young angelic girl.
READ REVIEW
Next Previous 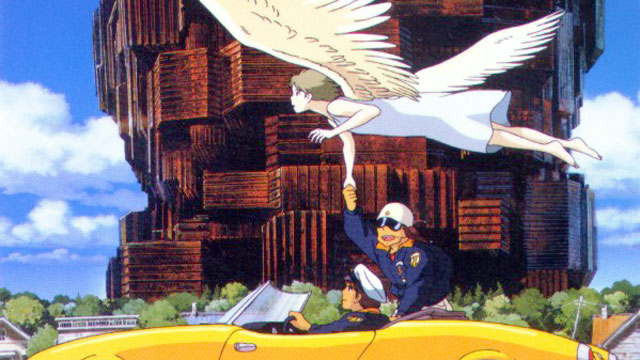 A while ago, I reviewed She and Her Cat, a short film by a man sometimes called the “next” Miyazaki. Well this time we’ve got something from the man himself, On Your Mark.

Technically it’s not a short film, it’s a music video from 1994 for the popular Japanese pop duo Chage and ASKA and thus I’m cheating. ASA and I decided a while back we wanted to stick more so to narrative pieces and shy away from music video and the like. But in my defense he did review The Owl a few weeks back, and this music video, with the care taken in the development of its characters, the intelligible plot and cinematic scope, make On Your Mark far more akin to an auteur’s short film than to an MTV style/technique showcase.

A quick rundown of the plot—two police officers raid the headquarters of a religious cult in a futuristic city. Inside the lair they discover a beautiful young girl with angel wings. She quickly taken away by a team in biohazard suits, but to the two male officers the image of the girl lingers—they decide to help the girl if they can.

Released to much fanfare in Japan, long-time fans of Miyazaki were excited to be able to see Studio Ghibli’s take on a futuristic cityscape, something anime is generally known for, but was a setting which Miyazaki and Ghibli had hitherto ignored in favor of either fantastic or idyllic landscapes in their previous films. Other elements remain the same though, the angel girl is directly out of central casting as far as Miyazaki heroines should look or act, and preserved from previous films, is his fascination and wonderment with flight.

Also preserved was the incomparable quality of the animation. A bit dated now, but still gorgeous, and for its time quite an achievement. On Your Mark was produced in part as an experiment by Miyazaki in using computers to supplement hand drawn cell-animation, a blending, rather than replacement of traditional techniques with technology that to this day is still the norm for the anime industry. It worked well too, as several of these then-experimental techniques were later employed in Miyazaki’s Mononoke Hime (Princess Mononoke).

Still the genius of Miyazaki has never been simply the look or feel of his work, but the tremendous emotion it is able to elicit. Constrained by the brief runtime, On Your Mark is still capable of pulling those heartstrings and engendering questions and thoughts. What exactly is the nature of the “restart” halfway through the film? I’ve seen the film several times and its still a mystery.