This doctor has her work cut out for her as she struggles to resolve the conflicting voices inside the chaotic mind of a patient with multiple-personalities.
READ REVIEW
Next Previous 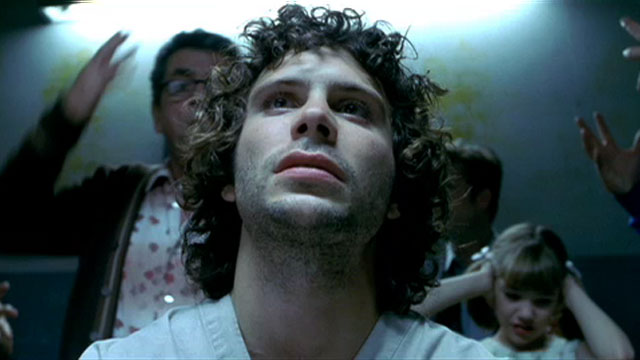 In the dark and depressing spaces of an insane asylum, we meet Daniel (Jeremy Sisto  Clueless, One Point O). Actually, we meet Daniel along with violent Bo, apologetic Mary, young Beth, suspicious Pierce, and quite a few others. They would crowd a room, but they don’t share a room. They share a brain, and with them all talking, yelling, and crying at once, none of them are ever getting out. Maybe, just maybe, Doctor Jane can help quiet the noise.

Inside was made as a show-piece for the skills of the cast and writer Eric Gewirtz and writer/director Trever Sands, and it does an excellent job of it. The script reveals Gewirtz’s quirky humor and dramatic flare. The dialogue tells a lot in few words, which is exactly what it should do. Sands has absolute control of the frame, with lighting that almost tells the story on its own and superb angles time and again. Hes at his best when everyone is talking over each other, yet everything is clear. Sisto shines as well, displaying restrained elegance. Ive never seen him better. Reedy Gibbs is also impressive as the strong-willed Doctor Jane. She has a motherly feel, which is fitting as Gibbs is Sistos mother.

As Sands and Gewirtz point out, Inside is like a lost episode of The Twilight Zone. However, many of those have not stood up well to the passage of time, while Inside feels both fresh and familiar. Sure, the twist is predictable, but also satisfying. Inside has an eight-minute story to tell and does it in eight minutes - six minutes when viewed online with the credits clipped. That’s a pleasure after watching so many eight-minute stories told in ninety.