If like me, you track the search term ‘short film’ in Google News or Twitter, it would have been pretty hard for you to miss a headline like the one in this article (obviously missing my comedic addition) over the last couple of days. Damien Chazelle’s much-heralded Whiplash short (you know – the one that lead to the Oscar winning feature film of the same name!) was now online…or was it?

Spreading like wildfire over the internet, the short was picked up by some of the largest film, entertainment and news websites around – from film institutions like the BFI, to entertainment outlet Rolling Stone and UK newspaper The Independent – but had anyone stopped to ask the most important question about the film – is this a copy we should be sharing? 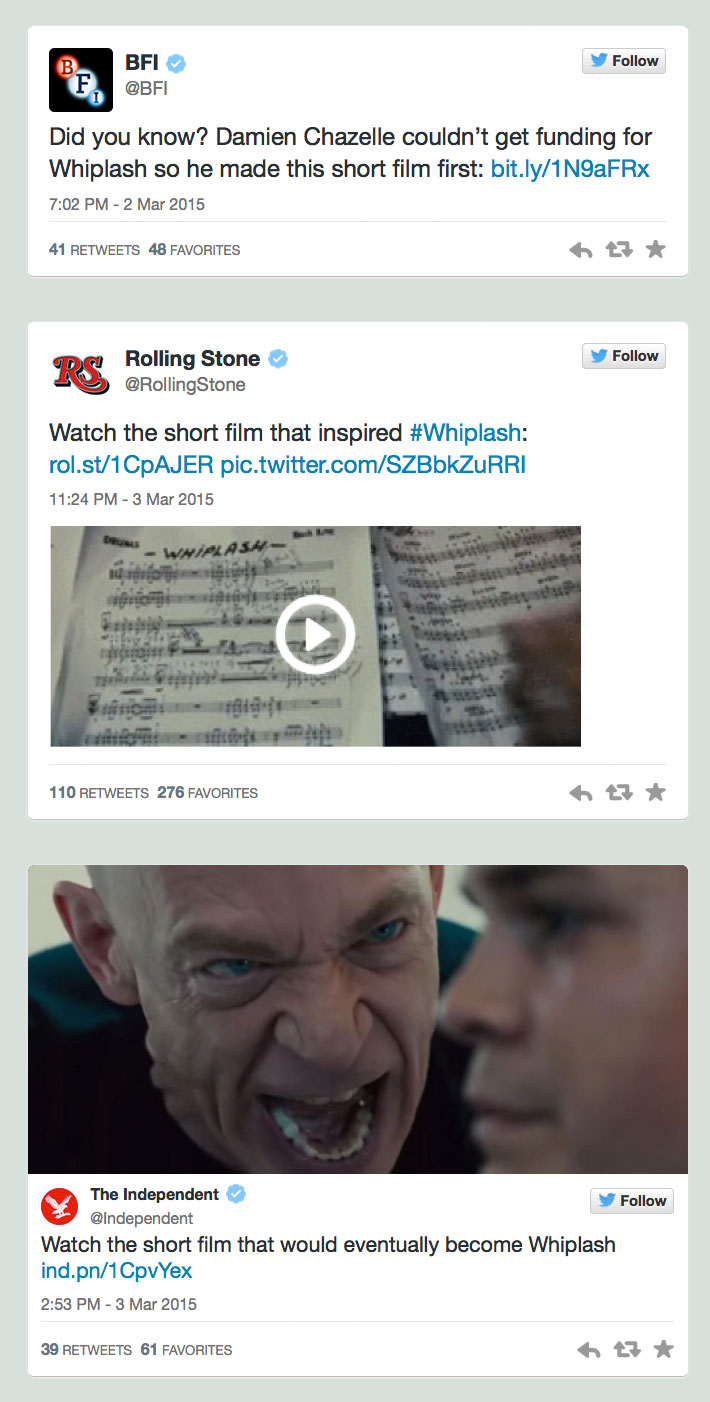 Writing for Short of the Week and working in a Journalism department of a University, one the most important things I’ve learnt as a journalist has to be to always check your sources – does this not apply to the world of online video and short film as well? With videos uploaded to YouTube or Vimeo, websites could easily deflect responsibility to the platforms that host the video or the users who uploaded them – but what about our responsibility to the original artists of the piece – the filmmakers and their teams? As a film journalist, would you share a copy or torrent of Whiplash the feature film you found online or would you (rightly) question the validity of the copy?

If you’re a fan of short film (as you’re reading this – I’ll assume you are) you’ll more than likely already know that most short films find a home online in the end. However, like with feature films, the legal distribution of these films is decided by the filmmakers, production company or distributor of the piece, not when someone outside of the production decides to release it. So why did these such respected outlets decide to feature a film, that was so obviously an unauthorised copy (one click on the uploader’s name would have revealed it wasn’t official)? Was it purely clickbait tactics? Was it like a domino effect where one website covering it meant the others trusted its validity? Or did they simply not care?

As someone who spends a lot of time writing about short films, in my early inexperienced blogging days covering the format, I probably would have covered the Whiplash short as well – not giving a second thought to copyright. With experience now on my side – it isn’t a mistake I’d easily make and one I’d be very apologetic for if ever I did (it seems like a very disrespectful thing to do to anyone involved in the production!).

Now removed from YouTube ‘due to a copyright claim by Sony Pictures Entertainment’ the sites that covered the short are now left in somewhat of an embarrassing predicament – a headline that states you can see Chazelle’s film, but an empty black space featuring only a sad face where the short once was. What do they do? Take the article offline? Offer an apology? Nothing?

I’m sure many sites will leave the article up because of the traffic it will bring their way – but it would be nice to think that some would acknowledge their wrong-doing and at least make an amendment to their article. The widespread coverage of Chazelle’s short will hopefully be a lesson to everyone involved, as whilst copyright for online video can easily be passed off as somewhat of a grey-area, if you’re a site dedicated to celebrating and promoting film of any kind, show the filmmakers the respect they deserve and don’t share unauthorised copies. Remember kids – ‘Piracy is not a victimless crime’.

If you’re interested in seeing more of the Twitter activity relating to the Whiplash short (which even though the short film has now been taken offline – is still going on!), check out the origins of this article on Storify.