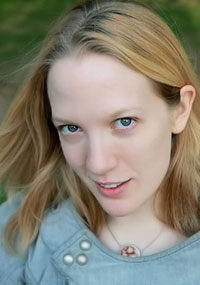 Yesterday’s post, Sundance Short Films: Program 5, was the last batch of new 2011 Sundance films to come online, however we rage (rage I say!) against the dying of Sundance-related content. So I invited the lovely and talented Emily Carmichael to answer a few questions over email regarding her short film, The Hunter and the Swan Discuss Their Meeting, which, incidentally, was, my favorite film of that last Sundance Program.

Emily is a prodigious talent: she has been published in a New York Times best-selling essay collection while still a teenager, studied painting and literature at Harvard, penned several plays for the stage, and is a recent graduate of NYU’s MFA program in film. In 2008 she co-founded a production company Kid Can Drive, through which her work, including The Hunter and the Swan Discuss Their Meeting, is created.

Your artistic pursuits seem to be pretty diverse, if you would,  explain how you came to filmmaking?

I was always into drawing and sculpting and constructing things out of paper, from when I was very young. I wrote when I was little too, but I started really writing in elementary school and I was amazed how easy it was to make my little classmates laugh that way.

In high school I kept on writing short stories and painting, but in college–I don’t know, it was different. The culture of the art department was very fine-arty and distrusted anything it called “illustration.” So I ended up getting into playwriting and I really liked it. I started directing my own plays because it was easier than getting someone else to do it. But I liked that too, so when I applied for grad schools out of college I applied to filmmaking and playwriting schools, and I eventually chose film because I didn’t want to give up the directing element.

A theme of your work seems to be fantasy; in your shorts you’ve dealt with RPG video games, ghosts, and now fairy tales, yet always look to deconstruct the expected postures of these characters and imagine what might be under the surface for people in fantastical settings. Do you agree with this statement, and what brings you to these themes?

Totally, I think that’s a great description. I’ve always loved fantasy and sci-fi, since I was a little kid, but when I started writing short stories they tended to have this really modern, conversational style of dialogue, so I guess as I moved into plays and film I started looking for ways to combine the two. And like, I love superhero movies, but–they make me feel kind of BAD sometimes, like that’s great that everything worked out for the Incredibles, but… no one in MY family walks on water. And that’s even with me purposely picking an example that’s supposed to be a kind of post-superhero story–The Incredibles SHOULD make you feel better about being you.

What kind of statement were you going for with the contrast between the two couples?

Well it’s definitely that the couple with the more magical origin story has the less stable relationship. Also that the Hunter and Swan are a very gender-classic couple, but the Other Couple is a little switched in that the guy is a little more gentle and sentimental than the girl. I’ve always known lots of very sensitive men and very outspoken women, so to me they feel like a very familiar pair.

Walk us through the development process of the story and the production.

I wrote some of the film when I was back at my parents apartment looking at this old Time Life book of “Fairies and Elves” that I had. I showed it to a few people, including Josh (Kid Can Drive Producer Josh Hetzler) who really wanted me to finish it so we could make the movie. I write a lot of little fragments of things that lie around in various ways, so it was good to have someone there saying “THAT one.” Most of the crew are longtime collaborators of Josh’s, he has a little team/family/biker gang that go with him from project to project. Cara Francis played a big role in helping cast–Elizabeth Stewart, Lauren Sharpe and Brendan Donaldson are all friends of hers. Ryan Link just responded to an ad and came in to read.

The film has two distinct segments, the flashback scene at the lake and then in the Brooklyn apartment.  What thoughts went into the artistic decisions in how to represent these two settings?

A lot of that is Ben Richardson, the cinematographer, being like “I’m going to do all this [long list of stuff that will make it look all magic-y]” and me being like “yes.” We looked at Guy Maddin’s movies a lot.  Ben had the idea to shoot the Other Couple’s flashback–where she walks in on him puking–in the same kind of diffusion-heavy style as the story at the beginning.

Describe the production itself, how long was the shoot, what kind of equipment did you use? Any difficulties arise while on set?

The production was wonderful and easy and fun. We shot on two and a half very light days. We were all actually kind of amazed at how problem-free it was. We shot on the EX-3, (with lenses for the flashbacks and without for the dinner.) The floaty-camera of the dinner scene is Ben shooting with a fig rig.

Having seen a lot of short films coming out of NYU, including two other films in this Sundance program, Nick Paley’s Andy and Zach and Tahir Jetter’s Close, it seems a lot of this work is exploring a realist vein. Is this something you notice too, and does the atmosphere of the school itself foster these sorts of explorations of emotional landscapes?

I don’t know if it’s the landscape so much as the way that it’s being explored–the style of writing and the visual style. There are different approaches to low-budget films. Some really try to emulate (with more and less success) the look of traditional big-budget filmmaking, and some explore various other looks that have enough kind of clout to look “intentional” in their own rights. I think going the second route is really smart–especially now with all this crazy Youtube business, you can shoot in all sorts of fast, flexible ways (even our shoot was pretty un-fussy in the lighting of the dinner scene) without looking like you ever had to compromise.

You did go to Sundance this year to support the film. Had you been before? What was the experience like?

I’ve been to Slamdance the two previous years with various episodes of my animated short series The Adventures of Ledo and Ix. The first time I was there for Slamdance I met some good people (like Dave Golden, who is music editor and music supervisor on Hunter and the Swan) who took me to lots of Sundance events and parties, so I really feel like I’ve been going to the same Sundance/Slamdance mashup festival for three years in a row.

Any fun stories to share of your time there?

Oh snap. Well, what projects can we expect to see from you in the future?

Right now I’m finishing the script for my first feature film, called Futuristic Brooklyn, and working on building a crew and finding financing to shoot it. Come join the Facebook group to get updates on all this stuff!  I’m also doing ever more episodes of The Adventures of Ledo and Ix, which are unfolding on Penny Arcade TV.

Well, Thank you very much Emily for sharing your time. Any short films that you’ve seen online that you care to recommend?

Thanks again to Emily for her great answers. You can see The Hunter and the Swan Discuss Their Meeting for a limited time in our Sundance Program 5 coverage. You can find more about her projects at Kid Can Drive and follow her on Twitter @emilycarmichael.