While many filmmakers think that exhibiting your short film online will disqualify it from screening at the world’s biggest film festivals, the truth is that 2/3 of the top film festivals now accept films regardless of their online status. You no longer have to choose between festivals or online. You can do both with a strategy we recommend for our filmmakers called Be Everywhere All At Once.

Purpose: Provide a summary of the online eligibility guidelines of the top film festivals to help filmmakers develop the best release strategy for their film.

The information in the table has been collected through contacts, submission guidelines and festival rules and regulations (on official websites, Withoutabox & FilmFreeway).

Here is what to look for with regards to the eligibility of an online film:

Short Films have no premiere requirements or prior screening restrictions to retain eligibility. U.S. Short Films may have been screened at any number of festivals or other public theatrical exhibitions anywhere in the world, broadcast or streamed on television or the Internet, and/or released via any home video or other public distribution platform. – Sundance

There are no premiere or prior screening restrictions for short films. Shorts may have been broadcast on television or the internet, released via any home video outlet, and/or publicly screened anywhere in the world and still remain eligible for consideration by the Festival. While there is no premiere rule for films screening within the main programme, we do prioritise UK, European and World Premieres for our Short Film Competition. – BFI London Film Festival

If it has been available on the Internet in its country of origin only, it may still apply for Panorama, Forum and Generation. The Competition as well as Berlinale Shorts do not accept films that have been presented on the internet or on VOD. – Berlinale

Films that have been or will be broadcast on television in Germany, that have a cinematic release in Germany, have been published online, or released via any home video or other public distribution platform (Blu-ray, DVD, streaming, VOD, etc.) prior to DOK Leipzig 2018 are not eligible – DOK Leipzig

One of the greatest honors for a short film is recognition from the Academy of Motion Pictures Arts and Sciences. Oscar rules have undergone several changes in recent years, and thus are poorly understood as they relate to online distribution. Originally, short films could not be online. Then, they could be online as long as they had previously qualified. Now, under the latest rules (current as of July 2018), short films are eligible for Oscar consideration if they win an Oscar-qualifying festival regardless of previous online distribution. The relevant rule (emphasis ours):

The film must have won a qualifying award at a competitive film festival, as specified in the Short Film Qualifying Festival List, regardless of any prior public exhibition or distribution by nontheatrical means. Proof of the award must be submitted with the entry. The Short Film Qualifying Festival List is available at www.oscars.org or may be obtained from the Academy. (Rule III.A.2) 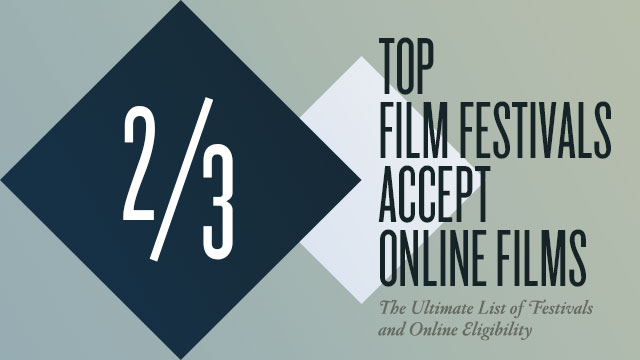 The key takeaway is that the majority of festivals don’t mind if your film is already online. Some festivals are still sticklers for premieres, including more than a few prominent ones, but for the most part, it’s not as taboo as convention would have you believe.

However, prior exposure does matter—if your film has already exploded online, there’s a chance that a festival will be less interested in screening it. Programming is subjective, and, after all, some festivals do want to maintain a sense of exclusivity that a viral sensation would inherently negate. Yet, the opposite can also be true—it’s becoming increasingly common for films to be selected for festivals because they’ve done well online. Many medium and smaller festivals that have difficulty competing for entries are reaching out to filmmakers directly. Its not uncommon for a filmmaker to receive dozens of requests for their film after they’ve posted it online—many of the fests willing to forgo entry fees.

Both of these points stem from a humbling observation—the world is a big place. Even if your film has received thousands of views online, odds are that not a single member of the audience that attends your festival screening has seen it. And it seems that things are only going to continue in this direction. As more short narrative content continues to flood online, and as more audiences turn to the web for the greatest stories, even the strictest of festivals will need to revise their rules or risk being left behind.

* Special thanks to Katie Metcalfe (curator for the Sundance Film Festival and Commissioner for NOWNESS) for her initial help in compiling the list.