For the past few years, writer/producer Stephen Follows (Sign Language) has been investigating the topic of women in film. His latest article How Well Are Women Represented Among Short Filmmakers takes a look at the issue in the world of short film.

But first, let’s take a step back.

A Bit of Context

Stephen published a report in 2016 following an extensive study of women representation in the UK film industry. That work highlighted an interesting phenomenon. While film schools showed gender parity with 49.4% women enrollment, once you moved up to feature films, only 13% were directed by women.

And the further into a filmmaking career one goes, Stephen’s findings suggest, the further that percentage drops. Despite 2019 being a strong year for female-directed films, no women were nominated for the Oscar’s Best Director. In fact, over the past 20 years and 100 nominees, only 3 have been women—a paltry 3%.

As short films commonly represent a waypoint on a filmmaker’s journey between film school and feature film, why not look at the representation numbers in short films? This is exactly what Stephen’s latest research attempts to do by looking at the percentage of women in short film over the past 18 years.

What percentage of short film Directors are women?

This begins to paint a more complete picture of the representation of women across the span of a typical filmmakers’ career:

However, like any number, there is more to the story.

This number is an average of the last 18 years. If you look at the trend line over the last 10 years, the percentage of women directing short films has risen from 18% up to 27%. Interestingly, it’s risen much more dramatically than feature films over the same period which have seen much more modest progress (11% to 13%). 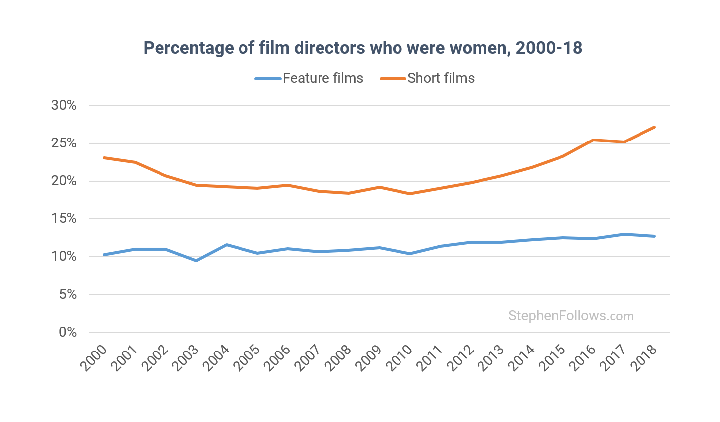 DO FILM FESTIVALS HAVE A BIAS?

“We can say that short films at film festivals have a better representation of female filmmakers than a wider dataset of all short-form content.” 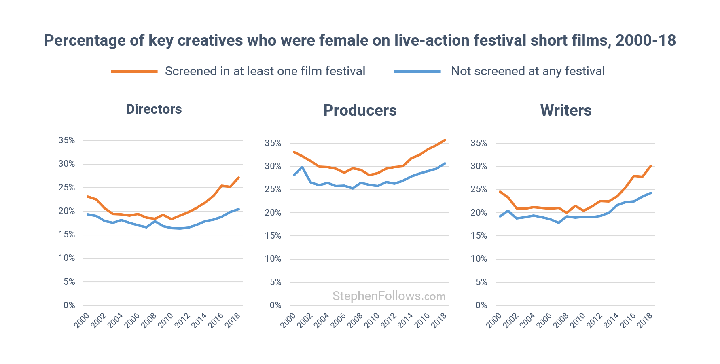 I asked Stephen if this meant film festivals have a bias for selecting short films directed by women. Yes. “It’s very very clear that it does. It’s not a massive effect, but it’s a consistent effect.”

WHERE DO WE GO FROM HERE?

It’s worth pointing out the shortcomings of Stephen’s methodology for this study. He only considered live-action short films that were selected by film festivals which may be leaving many legitimate short films out of the study. He also relies on an algorithm that determines gender based solely on name and doesn’t accommodate for non-binary gender categorization. Stephen calls out these shortcomings explaining why they were necessary and holds that the remaining quantity of films is enough for a meaningful result.

With a clearer picture in mind, the question for us filmmakers, managers, and producers in the industry is where we push it from here.

If you’re looking for support along your filmmaking journey, I highly recommend you check out our Women Filmmakers Guide for helpful tips and links on everything from funding to mentorships to festivals.