During a PowerPoint presentation diagrams break free from their restrictions and a trip into the sensual world of statistics begins.
READ REVIEW
Next Previous 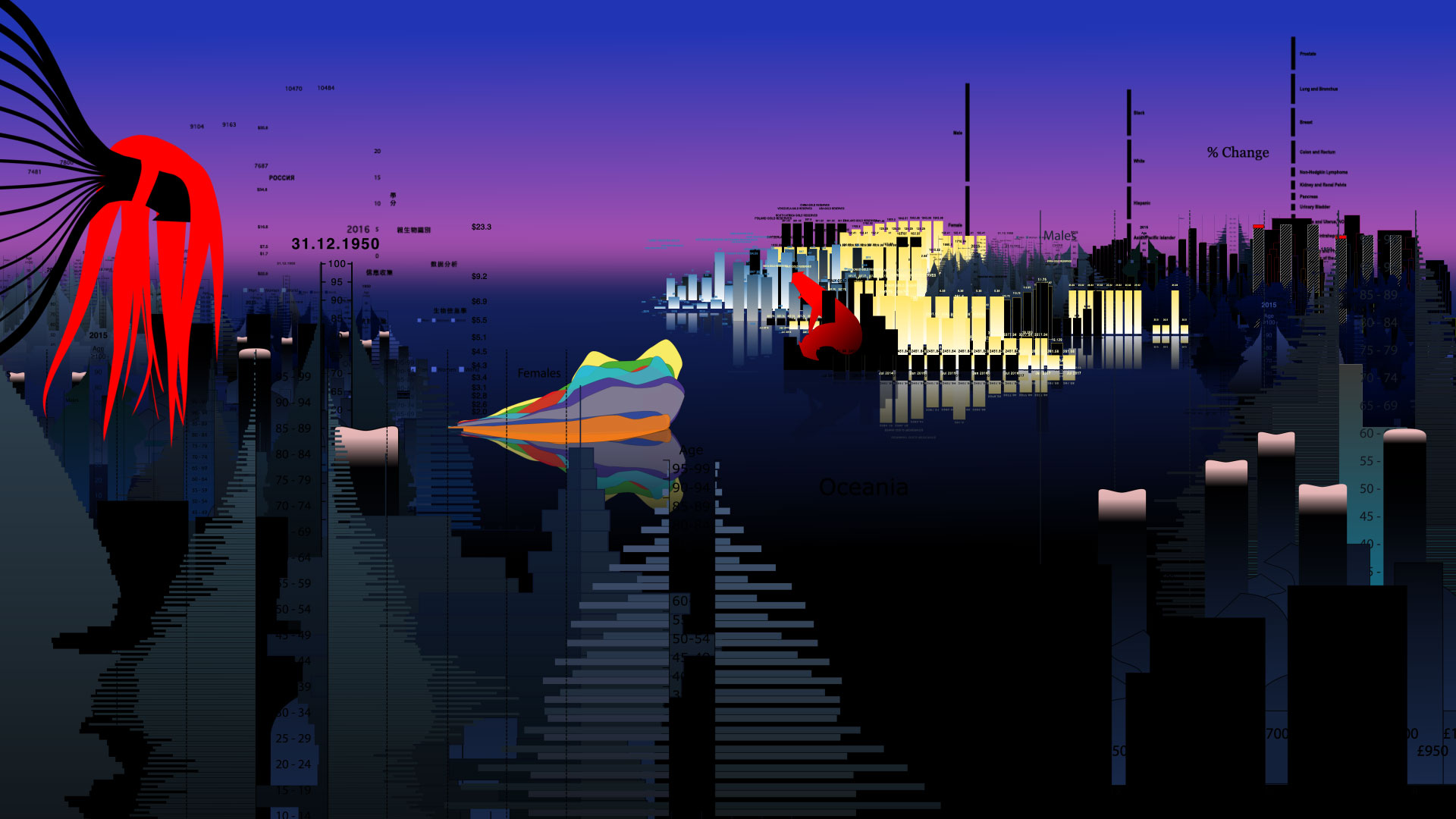 Data is everywhere and we’re surrounded by it on a daily basis. Whether in your work, in your personal lives or, more recently, in the midst of a global pandemic, we’re drowning in a constant flood of analytical information that tells us how well we’re performing in life. Looking to change our perspective on statistics and inject a little sensuality into them, Maja Gehrig experimental animation Average Happiness thrusts it audience into a world of undulating charts and graphs, which morph together to create a disorientating, but oddly inviting world.

Beginning as a very traditional PowerPoint presentation displaying some truly riveting information about life-satisfaction in Europe from 1973-2009, as the demonstrator begins to look at linear relationships in the scatter graph the lines begin to pull at the edges of the chart, revealing the world beyond – one made up entirely of visual representations of data. From here on out, everything takes on a very organic feel, as bar charts sprout from the ground like flora, a pie chart rises into the sky like a sun and an area graph breaks free of its cage and starts to travel slug-like across the screen. If that’s not sounding very sensual so far, fear not, it’s all building to a rather satisfactory climax where lines quiver and segments merge, everything becoming much more fluid. The diagrams come together to form landscapes, complete with a pie chart sun.

Explaining that “the idea to transform statistical diagrams into sensitive bodies” was inspired by a “misspelling” in a pitch for a different project, in this video interview for Annecy, it’s clear that attributing tactile qualities to the objects was key in Gehrig’s approach. For the visualisations used in the short the director sourced them all from the internet and worked with them to turn them into landscapes – both naturalistic and urban. The effect is both mesmerising and effective, as this isn’t just a visual experimental for Gehrig (even though it plays a bit like one) there’s plenty of meaning behind her premise.

Admitting that she was inspired to reveal the “hidden beauty” behind the diagrams by taking them out of context, Gehrig hopes that her film shines a light on our obsession with statistics (describing it as like a “religion”) and how we use them to measure things that feel completely unmeasurable – like happiness. Though our relationship with statistics has probably altered in the wake of a global pandemic, where the cold hard data was the only way to get a real handle on the situation, it’s easy to see the point that Average Happiness is making. From monitoring our weight to working out how “popular” we are on social media, using these statistics to measure our lives feels like a dangerous game to play, one where you’ll never really be happy. As the film reaches its climax charts begin to melt, twirl and merge taking on new meaning.

And this is a subject that’s long fascinated us at Short of the Week. As an organisation that’s motivated to help emerging filmmakers find a “bigger” platform for their short film, it’s hard to look at the success of an online release without relying on statistics – view counts, page views, comments, likes – but there must be more to it than this. Is a film only successful online if it reaches X number of viewers or is it more about connections? What’s more important 100k views from the general public or one view from someone in the industry ready to give you your next opportunity? Data will always have a part to play in our lives, but we need to understand that sometimes it can be tailored to show what we want it to show, sure it can tell a fascinating story, but you always need to look beyond the numbers and consider the bigger picture. It’s important to remember that 82% of statistics are actually made up!

If a film’s success was measured on festival appearances then Average Happiness would be considered a smash hit, having played a long list including Annecy, Sitges, Stuttgart, Uppsala, and Vienna, to name a few, and won awards at Clermont Ferrand, Fantoche and Regard. Made in 2019, the film is Gehrig’s fourth as director over a period of 14 years, so if the data’s correct, we should be expecting new work from her in 2023 and it should be approximately eight-minutes long.