A Night in Camp Heebie Jeebie

During a stormy night in Camp Heebie Jeebie, the ghost stories shared by a group of Jeebie Scouts become all too real.
READ REVIEW
Next Previous

A Night in Camp Heebie Jeebie 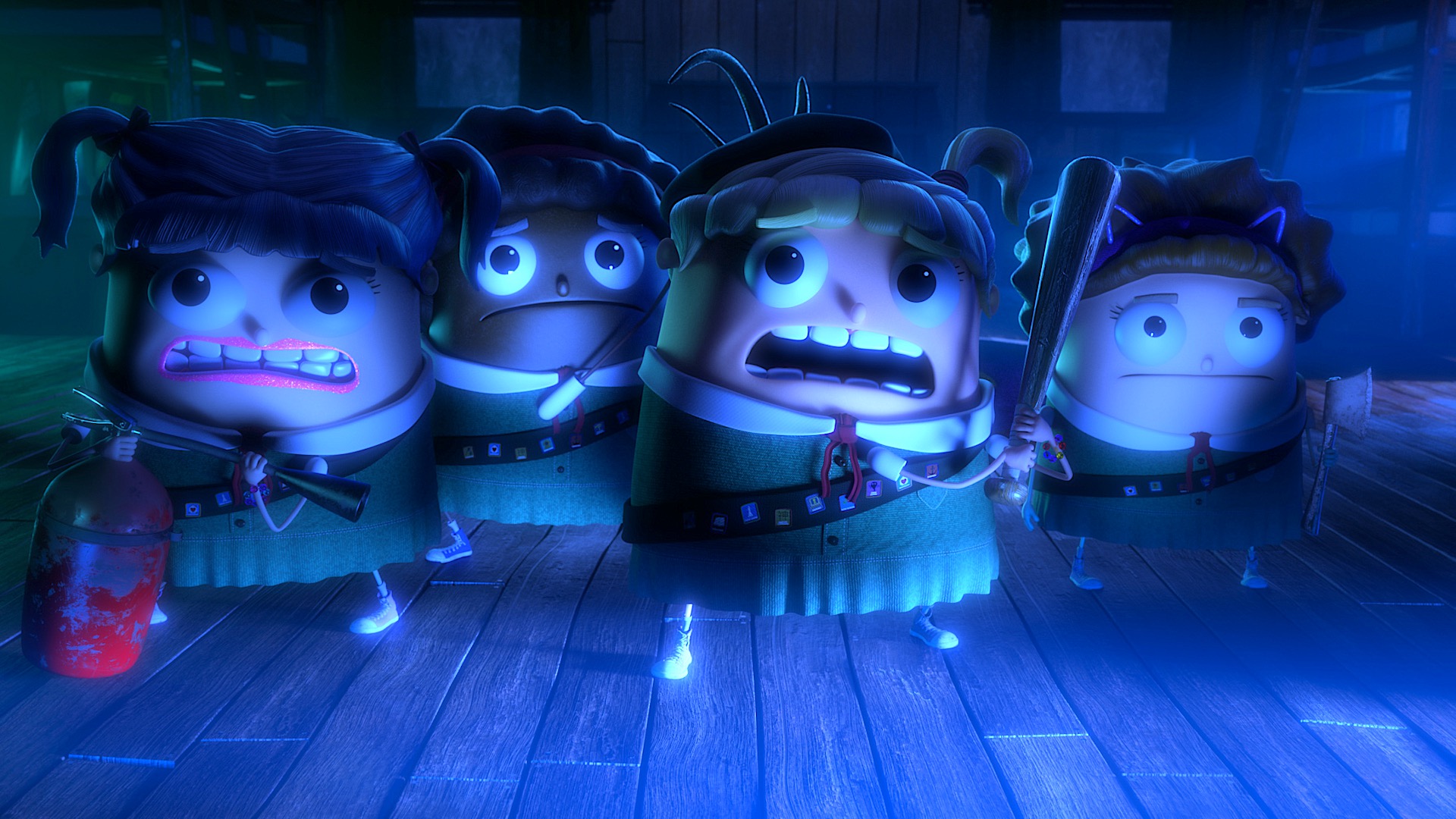 I was a scout once upon a time, and while it is not a defining part of my adult identity, I look back with fondness at those carefree days filled with knot-tying, whittling, and outdoor camping. A Night in Camp Heebie Jeebie’s director, Dylan Chase, finds much to admire in the philosophy of scouting as well, telling us he has long been impressed by scouting’s promotion of “…fundamental life skills, self-assurance, and maybe most importantly, the experience of growing and accomplishing with a community.” This is a fine sentiment, but the seed of a story was truly born from this next quote, “…and what better way to show off strength and community than to fight your greatest fears head-on with the support of your fellow scouts?”

It’s a charming origin story to what is an immensely charming film. With bright colors and unique character designs, Chase, alongside his co-producer Dave Jacobsen, has crafted a pitch-perfect CG horror-adventure-comedy that just stays on the right side of being too intense for younger audiences. Maybe give it a watch first, but this festival-lauded short might be the perfect Halloween treat for the little scout in your life. The logline tells you what you need to know: 5 female Jeebie scouts are entertaining each other with ghost stories late one night as part of their training to earn a “ghost stories” merit badge. Their stories are remarkably benign in the way that children’s fantasies often are—a stereotypical slasher tale gives way to increasingly absurd yarns that home in on their individual preoccupations with TV, sweets, and boys. The girls squabble over how truly scary their stories are only to be interrupted by a knock on the door. Camp Heebie Jeebie has quite a surprise in store for our scouts…

At just over 6min in length, A Night in Camp Heebie Jeebie is horror in name only. It successfully mines the mechanics of the genre, delivering steady thrills, but, as you can tell from the character design, it’s just too cute. With pill-shaped girls possessing big eyes and even bigger mouths, the art of the film defuses any true terror, which makes for an easy, pleasurable watch. Told with pace but never rushed, the story architecture is of the film is simply smooth—Chase has refined the writing to its essence, with carefully apportioned turning points, a sentimental moral, and even a deliciously macabre joke ending.

The voice acting is top-notch too. Each of the girls is rapidly distinguishable and establish personalities quickly. They are archetypes, but individuals all the same, and the performances are a big part of that. They are recognizably child-like, but in conjunction with the writing, are not annoyingly so, as the film doesn’t heavily lean on subversion, crassness, or pop-culture references like so much children’s animation nowadays. They are cute, funny, but wholesome too, in a way that doesn’t feel cheesy.

An animator and story artist at Soapbox Films, for Chase A Night in Camp Heebie Jeebie was a night and weekend passion project, taking over 3 years to complete. Working mostly in the evenings he fell into a rhythm with Jacobsen who would work mornings. Their hard work culminated in this Fall’s genre circuit where the film premiered at Screamfest and has quickly started making the rounds, receiving inclusion in this year’s Fantastic Fest lineup, as well as Nightstream, where we spotted it.

The quick uptake in the genre world is a testament to the fine balance the small team has struck in making a super-polished CG film that is kid-friendly, but not shorn of all edge. Of a film that has the emotional precision of a Pixar film without aping its style, and which, most importantly is a whole lot of fun! Chase tells us that he is at work on expanding the world of Heebie Jeebie, and we are most certainly here for it.