Drama about LGBTQ in Live-Action
Directed By Andree Ljutica
Produced By Andre Bato Films & Smamela Panderson, LLC.
Made In USA

We’ve all traded awful sexual encounters stories with our friends. At their best, they are awkward anecdotes of clumsy intimacy, full of humour. At their worst, they are horror stories, filled with fear and regret. In How To Say I Love You At Night, writer/director Andree Ljutica employs the “hook-up gone wrong” premise to explore themes of intimacy (both physical and emotional) and violence, outside of their usual arenas in cinema.

Please note: If you want to truly understand How to Say I Love You at Night, watch the film until the end – right until the end of the credits. Otherwise, you’ll miss what provides the audience with the Aha! moment needed to understand the emotional depth of the story.

Ljutica’s 17-minute short, tells the story of Benny and Paul, a couple of young men matched on a hook-up app. What was supposed to be an ordinary night of casual sex at Benny’s place, quickly turns into an uncomfortable and disturbing encounter, where the audience is constantly on edge, never knowing which way the narrative will turn next.

“A rather harrowing tale…equal parts banal and terrifying”

Inspired by the real-life experience of one of Ljutica’s friend, after he shared his story (similar to that in the narrative of the film), not only did it stick with the filmmaker for days, it left a lasting emotional impact on his friend. Described by the director as “a rather harrowing tale…equal parts banal and terrifying”, the magnitude of the event is actually quite hard to quantify as nothing truly dramatic happens. However, the emotional depth is actually quite insidious and that’s something Ljutica was fully aware of when penning the screenplay. 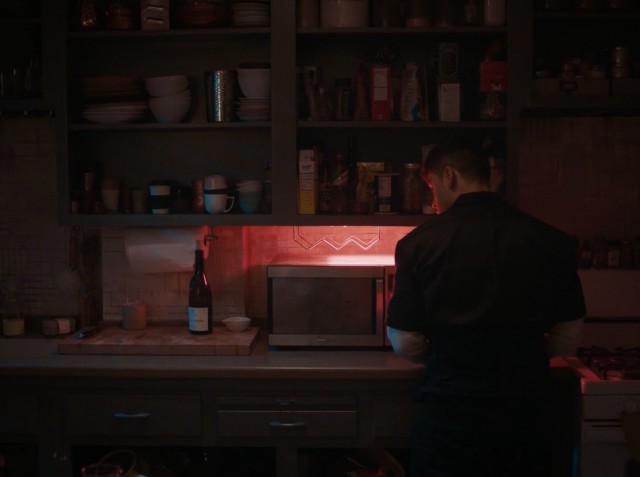 From its opening scene, we’re given early indications that this rendezvous won’t end happily, yet despite signalling the outcome of the film from the onset, How to Say I Love You at Night still manages to remain unpredictable. Early on in Ljutica’s narrative, the director injects a sense of intrusion into his short. At first unsettling, this feeling becomes contagious through the screen, building to an unshakable sense of anxiety and dread, that something bad will surely happen.

“So many people identified with this experience”

Despite the specifics of the situation, there is something truly universal in the themes and emotions How to Say I Love You at Night explores. Whether it be in a sexual encounter or simply getting in an uber, any situation where a certain level of intimacy is forced between two people will always be tinged with that fear of the unknown. “We’re all in a regular state of having to trust strangers”, Ljutica explains, “so many people identified with this experience. It wasn’t at all meant to be a cautionary tale, but I suppose it does strike a nerve”.

Not only is there this growing sense of unease, that Ljutica subtly infuses throughout the film, but in the aftermath of his story, we are hit by a more complex dilemma that adds a whole new psychological layer of understanding to the narrative. “Morality made an interesting interplay with his more immediate fight-or-flight responses to this person’s aggression”, Ljutica reveals as we discuss the motivations of his characters.

At the end of the day, this is quite a simple drama with an extremely well-written and uncomfortable dynamic between two young men, but Ljutica manages to take his film to the next level by trapping us in that apartment with them. Through DP Arseni Khatchaturan‘s photography, they bring us into the scene and make the tension feel almost palpable. 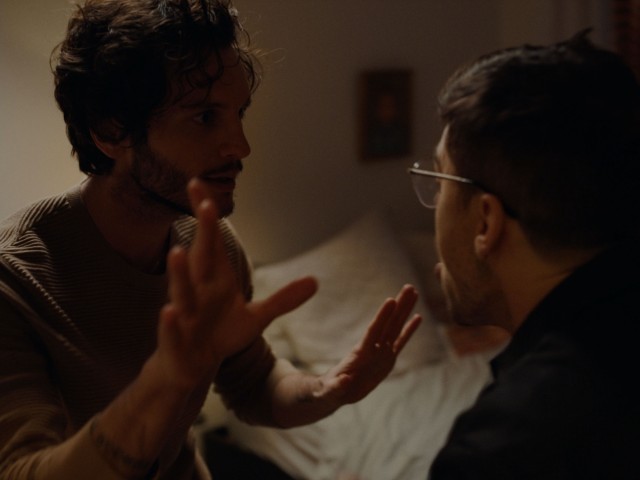 “This aspect ratio also worked well as it emphasized the uncomfortable intimacy” – Ljutica on shooting 4:3

A sense of claustrophobia is introduced through the 4:3 aspect ratio, which contributes to that feeling of forced intimacy but also lets us witness the night unfolding as if we were present, witnessing the events with a limited perspective. While capturing their story in a single take (which Ljutica describes as “rigorous”, but “freeing”), injects a sense of urgency to the scenario, adds to the authenticity of the story and also heightens that sense of dread that is constantly building throughout the film.

Making the audience experience the film in this way only strengthens our engagement with the narrative, putting us in the same emotional headspace as its increasingly-disorientated, unsettled lead. The two co-stars, Mat Vairo and Chris Petrovski, bring the story of How to Say I Love You at Night to life with layered and compelling performances, again increasing the authenticity of the piece, making it all feel uncomfortably real. Their chemistry, or intended lack thereof, is key in making the film so emotionally disturbing and successful and they both play their parts perfectly.

How To Say I Love You at Night made its way around the festival circuit with notable stops at Palm Springs ShortFest and InsideOut in Toronto, and we are happy to have it now on S/W. Ljutica is currently working on his feature debut, a drama set in Florida dealing with addiction.