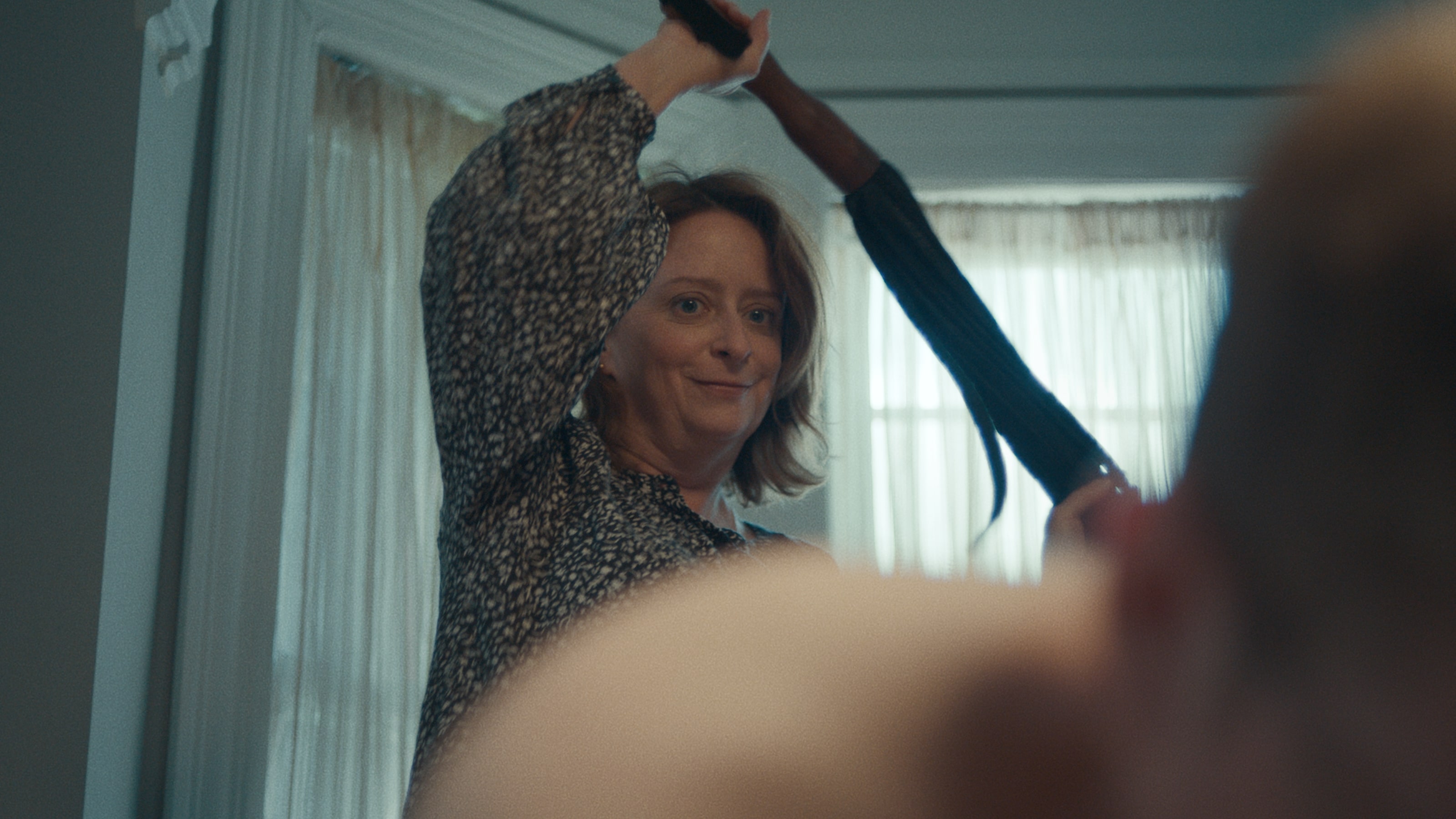 A nice suburban house, an adult daughter, a dog, and a stable job—Marcy has a rather conventional life. Having recently lost her husband though, she now finds herself stuck in a rut and in desperate need of a new chapter to her story. In Marcy Learns Something New, writer/director Julia Kennelly delivers a surprisingly moving story of a woman (wonderfully portrayed by Rachel Dratch) ready to stretch her boundaries in an unexpected way. The film’s subtle and empathetic mix of comedy and drama makes Marcy’s journey—dare we say—charming, in a way that you would not expect shirtless men being whipped to be.

From the premise alone, you might assume that Kennelly is using BDSM as the butt of the joke, a cheap way to trigger laughs. Subverting those expectations however, she steers clear of a farcical approach. For a film about kink, the remarkable aspect is how straight the setup is played. Instead, Kennelly grounds her character’s arc in sensitivity and empowerment, sourcing the comedy elements from a more sincere place—the awkwardness and discomfort of the situations Marcy finds herself during her transformation. The resulting tone is remarkable: threading a needle between a spare character portrait and a sex comedy, Kennelly utilizes the inherent sensationalism of kink to her advantage, but through a commitment to authenticity, never fails to be respectful to each of her characters.

Intrigued by the fact that femme-dom workshops existed for beginners, Kennelly attended a class and was struck by how practical and educational it was. “Despite the intimidating nature of stepping into a dominant role, one is given pragmatic tools to succeed – such as using a blindfold to get time to stall while figuring out the next move”, she explains. “Descriptions of the experience from others were both lighthearted and ultimately very touching, as many gained confidence to be in control of a sexual experience, rather than an object in it.”

From the opening scene, the quality of the production is undeniable. Rachel Dratch’s (unsurprisingly great) performance is perfectly modulated, invoking a weary woman for whom a dramatic life change seems a good idea, while, with her comedy skills, peppering the performance with the perfect hints of humor. Marcy is an almost instantly endearing figure, which carries the viewer through the sometimes slow setup . What truly struck me early on though, and set the film apart, was Kennelly’s comedic tone and the object of her focus—where many would have us laugh at their main character, it was obvious to me that Kennelly was instead subtly poking fun at the repetition of a cycle of habits.

The exposition of Marcy Learns Something New is unconventionally long, but surprisingly enjoyable. Witnessing Marcy dealing with her daily frustrations is not only entertaining, but also provides Kennelly an opportunity to showcases her comedic wit, while allowing Dratch to have fun with her character. As Marcy discovers this new side of her, every step of the process is written with compelling authenticity, mixing a funny pragmatism with emotional depth. Dratch brings it all to the screen perfectly, balancing both the comedic tone—stemming from the awkwardness and the surprising practicality of the events—with the moving self-empowerment of her character.