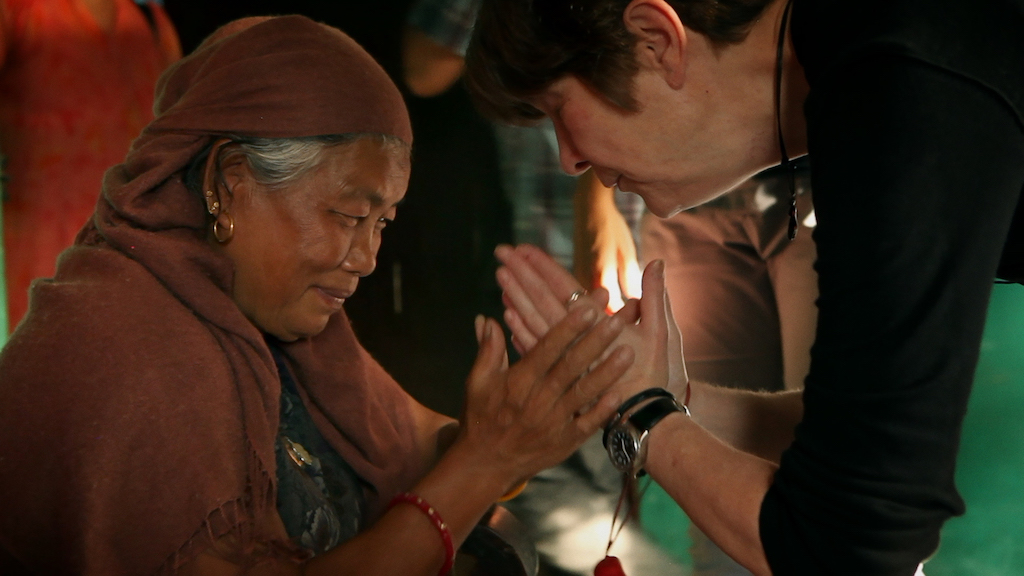 The world is a scary enough with all five of our senses–can you imagine how isolating it must be to be a deafblind person? A Woman Like Me tells the story of a deafblind woman from Denmark who ventures to Nepal to meet with another deafblind woman, who grew up with significantly less advantages.

Apart from the subtitles, there’s little in the way of language to guide us through the film. Director Isabel Morales Bondy presents the meeting of these two women without commentary or editorial bias; we are left to our own devices to figure out what’s happening by watching these two women attempt to communicate with touch-based languages.

As Bondy writes in a statement, “My aim is to raise questions about the conflict between how we interpret the world and how we perceive ourselves. I involve the audience by making them active observers in that intimate and unlikely encounter between two women who cannot communicate by sight nor speech.”

The film is filled with the sounds of palms rustling together, fists clenching, and deafblind women making sounds that we may have never heard before. Though we may not understand the words these sounds represent, we can still decipher tones of happiness, anguish, and fear in their voices. Ultimately, the film shows us that spoken or visual language is not always necessary for communication.

In a subtler way, this film examines privilege and the way that our assumptions of other cultures can sometimes alter our interactions with people we perceive to be worse off than us. Towards the end of the film, the Danish woman describes a nightmare she has where the comforts of her life in Denmark are ripped away from her and she finds herself in the body of the Nepalese woman she visited. She panics at the thought of how difficult it must feel to be in the other woman’s shoes. But the Nepali woman we see on screen seems relatively happy; she is surrounded by friends and family, and even though she’s never known some of the comforts that her Danish counterpart has, she seems relatively well adjusted and excited to meet another woman like her.

Though both of these women grew up under adverse circumstances, one had the advantage of growing up in a wealthy, progressive society, while the other has lived her life in a poorer country with less technological aid for disabled people. It makes you think about how many advantages we take for granted, and though there is always someone with a tougher time than you, it doesn’t necessarily mean they’ve lived a less happy life.