Actors are obsolete. Now there are just SPRITES.
READ REVIEW
Next Previous 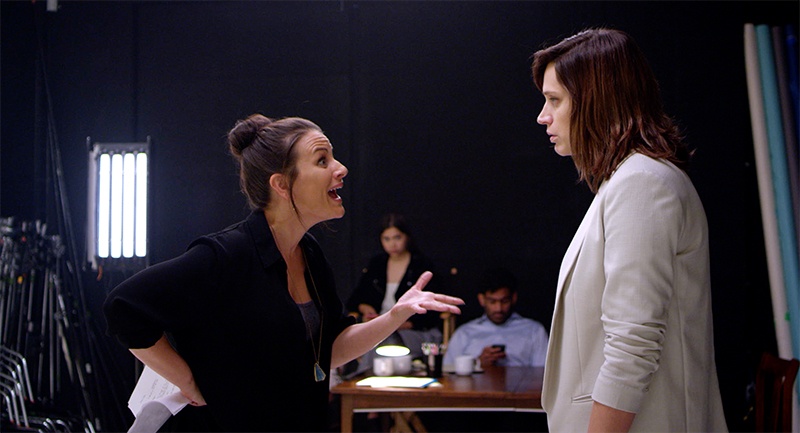 We have a curious relationship with technology. On the one hand we are obsessed with owning the latest products as soon as they’re out, and on the other, we have a nostalgia-laden love affair with old-school tech. For example, it’s hard to imagine life without Spotify, yet how many times have you heard someone say that nothing beats the sound of a vinyl record? Kyle Bogart uses the tools of science fiction, with the help of Admiral Kirk, to pose questions about humanity with genuine emotional weight in his dramedy SPRITES. You don’t have to be a Trekkie to enjoy this film. You don’t even have to be a sci-fi fan, because this 15 minute short is as moving as a Shakespearean play and as relevant as our love-hate relationship with artificial intelligence.

Set in the near-future, SPRITES imagines a world where actors have been replaced by much more convenient and cheaper holographic projections. One director in search of a lead for her upcoming film is convinced that a sprite couldn’t deliver a compelling performance, as authentic and rich as a human actor could. She is forced to question her preconceptions however, when Jim zaps into the studio for his audition. Bogart gives the AI debate a fresh makeover with some classic physical comedy, a surprising lack of high tech, and an abundance of humanity. As a result, SPRITES is at once technical and transcendental, and a future classic.

“In 2013 I was on stage at SXSW doing a Q&A for my short film NECRONOMICA and the panel was asked “For those that shot their shorts on film, can you explain why that was important to your process?” I found that question curious, in that it betrayed some assumptions baked into the digital vs analog debate. I wanted to examine our tendency as filmmakers to value the old over the new. Do newer technologies lack an innate humanity possessed by older mediums? Or is the distinction entirely arbitrary? I pushed this idea to an absurd extreme and the sci-fi concept emerged”, Bogart shared with S/W.

I have to admit that I’ve never seen a single Star Trek episode. I am not even a huge sci-fi fan, simply because it’s such a difficult genre to get right in film. But SPRITES bowled me over with its intelligent direction and absorbing character dynamics. Furthermore, the stripped back set design, the lack of special effects or fancy editing, and the performance-led approach felt like it was a piece that could work just as well on a theatrical stage, as it does on our computer screens. Quite fitting, considering Bogart’s fascination with nostalgia.

The performances were superb too. In fact, the characters were so well rounded and convincing, I was sure the two female leads, played by Liz Beckham and Lee Eddy, were in a relationship. It was only after a second watch, that I realised there was no actual evidence to either support or disprove my assumption. And Kriston Woodreaux, was simply flawless as the vacant, but disarmingly human, Jim.

SPRITES wrestles with some pretty heavy questions, but it does it with the lightest of touches and the result is a real cinematic delight. I hope to see more of Lesley, her producer and Jim the sprite, but for now Bogart is busy developing a horror feature as well as a series pilot adaption of his 2015 horror short HOUSE OF STRAW. We’ll keep you posted on his progress!