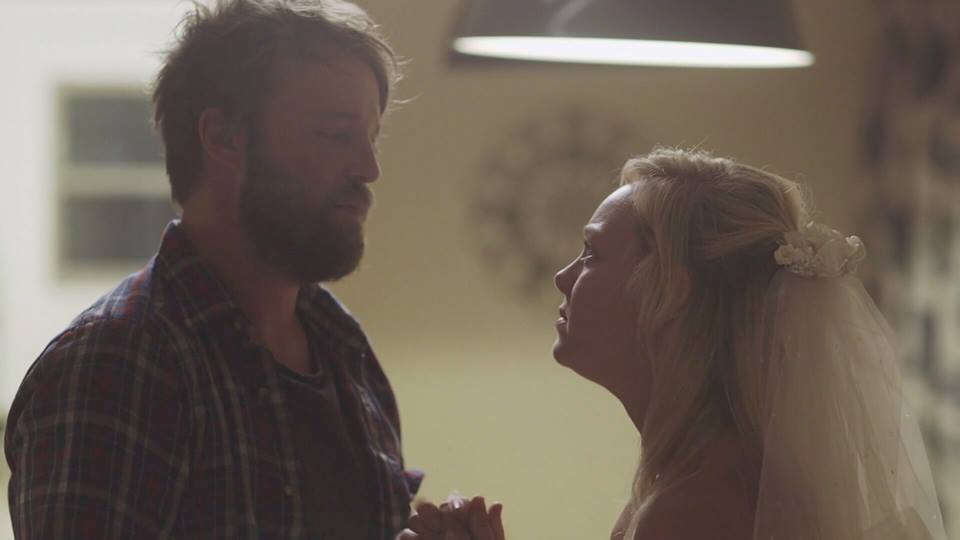 The symbolism associated with wedding dresses—something that represents a bright, happy future for most brides—is upended in Haroula Rose’s latest short, Wedding Dress. Part of her True Love Trilogy, Rose’s second film in the series follows a man, estranged by his family, who shows up on the doorstep of his brother’s house. By chance, his new sister-in-law answers the door, and what begins as a guarded relationship turns into an altogether freeing experience for both troubled individuals. Rose’s ability to create emotive characters on screen transcends the film’s themes of loneliness and escapism.

At the heart of Wedding Dress is a thematic representation of shattered expectations. For Rayanne (Abby Wathen), who dances with her brother-in-law (Joshua Leonard) in her living room to the tune of Allah-Las’s “Catamaran,” being in her wedding dress, post-wedding, is a symbolic way for her to let go of her ugly marriage and start a new beginning. The dress has transformed into a physical remnant of her romantic dreams, but the scene is not absent of hope. As Rose’s characters bond over wine and music, their loneliness is all but forgotten in an almost magical way that only her own anti-romanticism could pull off.

“Having this idea about someone who is lost and thinks she will be found, but in the wrong places, guided the film.”

“Having this idea about someone who is lost and thinks she will be found, but in the wrong places, guided the film,” Rose tells us. For both characters, who are lost in their own way, Rose’s escapist tendencies are only complemented by her character’s need to remedy their loneliness. The actors have a magnetic bond, despite the fact that their most intimate moments are fleeting. Eventually, the spell cast on both characters fades away, and, as such, it’s how the story ends—when reality sets back in—that makes it a satisfying watch.

Wedding Dress made its rounds on the festival circuit, winning two Best Short awards at L.A. Arthouse Film Festival and Atlanta ShortsFest, while also picking up two Best Actress Awards  at the L.A. Indie Film Fest and Women’s Indie Fest. Rose currently has a number of projects in the works, including an adaptation of Bonnie Jo Campbell’s “Once Upon A River” and a feature version of her short film “No Love Song.” For Rose, an industry musician-turned-filmmaker, we see many new directing endeavors in the future!