**Currently Offline** - Winner of the Grand Prize at Ottawa 2014, a brutal and provocative animation. Inspired by nature films of Hippos, women and children bathe in the stream when they are approached by men with malicious intentions . Not recommended for viewers sensitive to sexual violence.
READ REVIEW
Next Previous 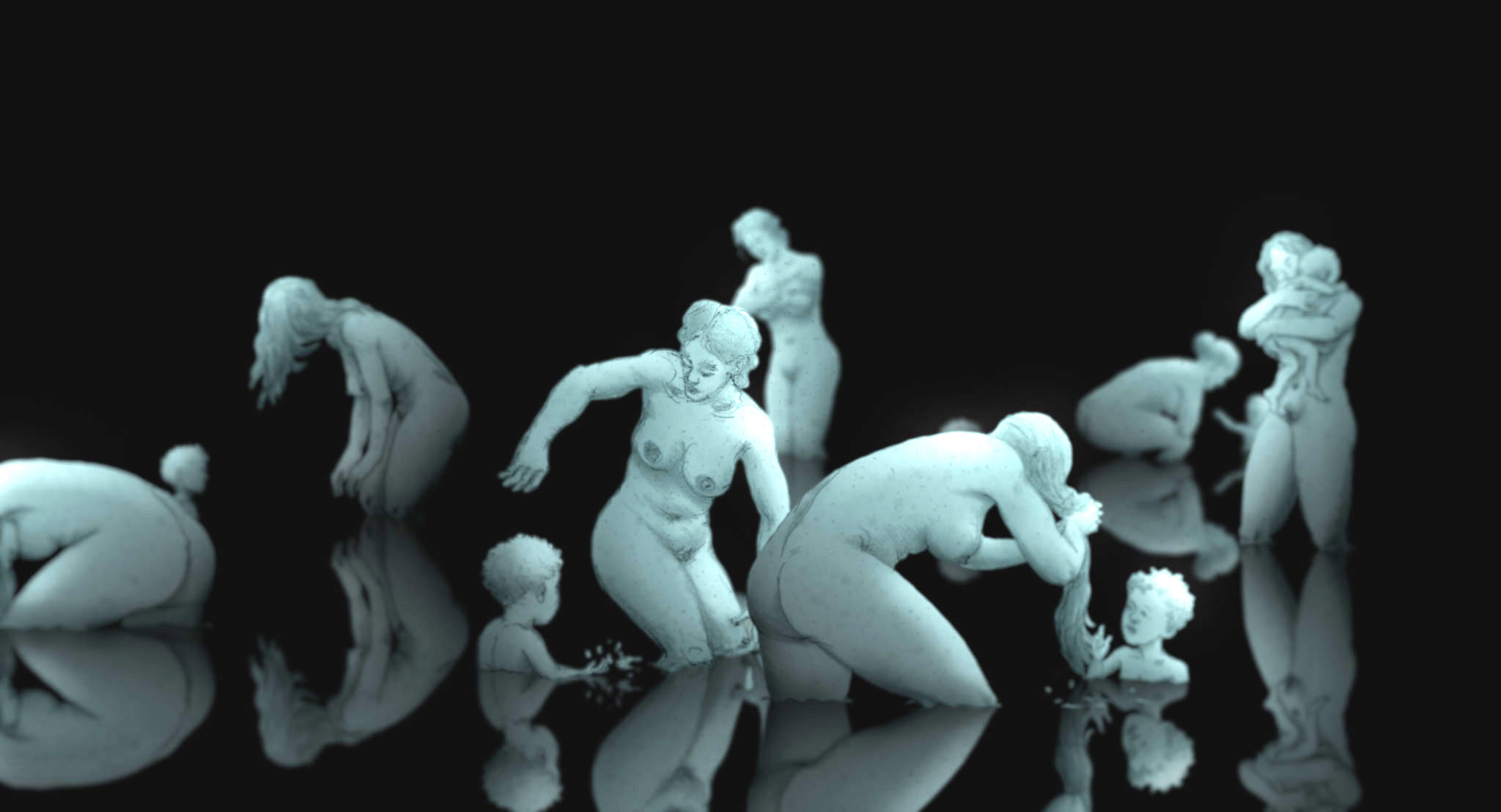 The controversial winner of numerous animation festivals throughout 2014 and 2015, Piotr Dumała’s short film is guaranteed to provoke a reaction in viewers. Eyewitness testimony confirms that the film was “modestly booed” at its winner’s screening at the fest. The reasons are clear, and in fact reasonable. Rape and infanticide are depicted in the film, and most garishly are presented beautifully, in a choreographed ballet of violence seemingly bereft of redeeming virtue.

While the craft of the film is undeniably beautiful, critics make the case that the film is profoundly nihilistic—an exercise in crass provocation. More worrisome, the main defense that the filmmakers mount against such charges is rather unappealing. In interviews they say that their work is the result of watching a nature documentary about hippo behavior in the wild, where male hippos will often kill the young in order to assert their dominance. Modern cartooning is built on a tendency to anthropomorphize, by reversing that tendency the filmmaking team achieves…what exactly?

Hippos are, frankly, bullshit, and it’s a bullshit defense of the film, exacerbating the criticism that the film is shock for the sake of shock. While I do believe the film team has deeper, more nuanced explanations for their inspiration, Hipopotamy is nonetheless a fascinating film independent of artist intent, and independent of the controversy surrounding it. Separating intent from reception, the film is a visceral experience that, in its ambiguity, creates space for thought, for interpretation, serving as a vessel for the kind of challenging reflection that, in my mind, great Art should provoke.

Reaching for interpretation is, in this case, warranted, because the film is so clearly a work of formal skill. A lengthy wide shot pans rightwards to open the film, before settling in on the scene of the women and children bathing. From the right, a tight closeup of men approach, walking the opposite direction. The conflict is immediately set up wordlessly through blocking. A marvel of pacing, the film begins slowly, but receives steady propulsion from its spare string score. Before anything happens, the sense of foreboding is uncomfortably thick via the crosscutting that does not seem to adhere to a set rhythm. While spare, the animation is top-notch—Dumała is well regarded on the international animation scene with a career spanning several decades, and the artistic decisions he makes: the featureless black backdrop, the almost iridescent blue of the characters, the cascading choreography, are visually striking.

However when the subject of a short is so inflammatory, appraisal will often come back to ideas. Yet no clear moral can be extracted from Hipopotamy, it is not a film for which defined thoughts, causes or agendas can coalesce. It hits you over the head with ugliness, but befuddles you with the contradiction of the grace with which that ugliness is presented. It leaves you fumbling for interpretation, a desire to rationalize the intense feeling that fills you. Critics argue that the lack of digestible themes is what is shameful about the film, but it is precisely what I love—the ambiguity that gives space for interpretation. For me, the classicism, repetition and ritualistic nature of the violence in Hipopotamy lead me to ponder the intractability of violence throughout human history. The cyclicality of the scene forced me to grapple with feelings of futility in the face of behavior that may be biological rather than cultural. Yet, I was presented with contradiction of the forced artificiality of it all, a performative aspect that speaks to higher displays of communication and meaning.

While much can be read into the film, certitude escapes. What of the woman and her child she saves? Is she a symbol of change, or an outlier? A simple confirmation of Darwinian selection? Do her eyes indict the women who return to these men, their abusers? Why does abuse persist, and why do we return to those that do us harm? What does that Goddamn dog have to do with any of it!? I’ve seen the film numerous times and still do not know. Is it the bridge between the natural and human realms, weighing in silent judgement at the animalistic behavior we’re capable of?

Hipopotamy derives its power from provocation, and in a world where so many have been victims of sexual violence there does exist a responsibility for those who would use shock in such a manner. But sensitivity and thoughtfulness is not an excuse to make vast sections of human experience off limits to creativity, turning a blind eye to the very real ugliness of our world that Art is often best situated to help us understand and cope with. Hipopotamy is explicit but not vulgar, and while I cannot universally recommend it, especially to viewers sensitive to sexual violence,  I imagine it will have a profound effect on those of you who give it a shot.