John is fighting to survive after being injured during a battle with a zombie. The viewer has to help him to make a test which will figure out the fate of him and his daughter.
READ REVIEW
Next Previous 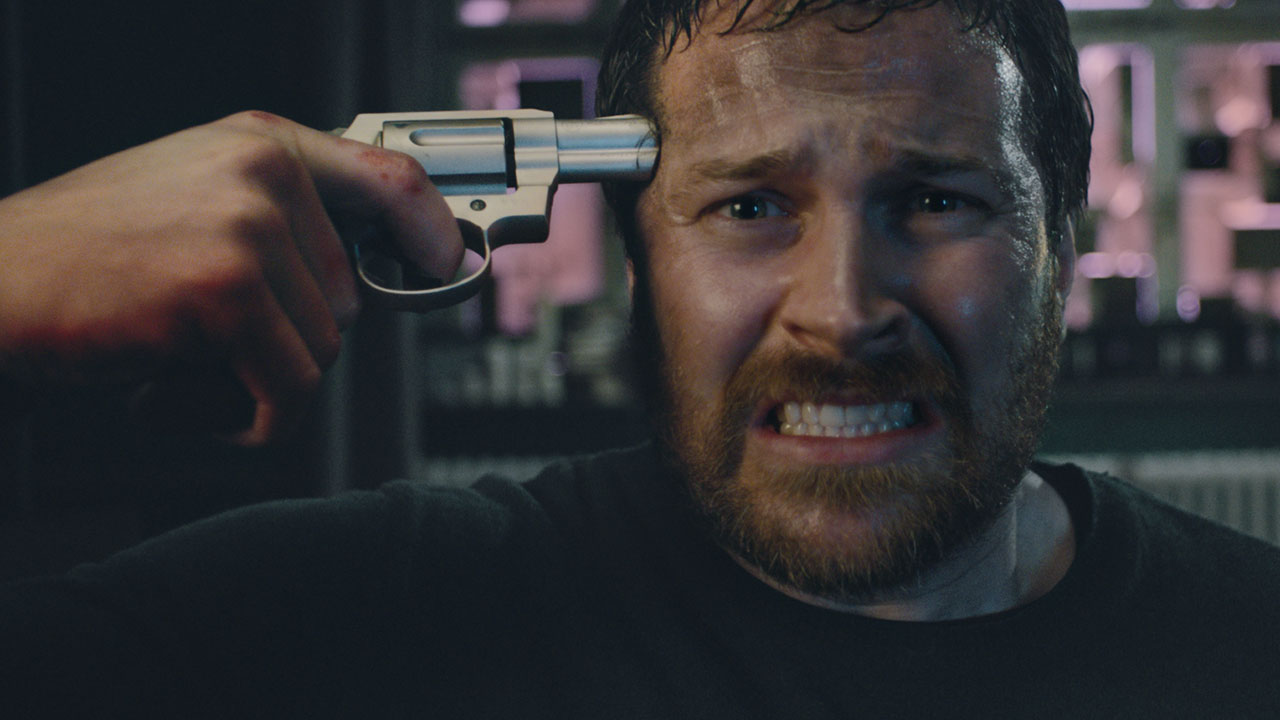 Taking us on an interactive journey through a blood-soaked Zombie apocalypse, Maximilian Niemann’s Five Minutes, gives us, the viewer, the opportunity to help decide whether its bitten protagonist joins the ever-expanding army of the undead. Providing its audience with a series of high-pressure tasks to carry out as the narrative unfolds, Five Minutes ramps up the tension and drags you into a universe where every second counts if you want to survive.

“It always happens within 5-minutes”

Set in a world of flesh-hungry creatures, where the first sign of infection is memory loss, Five Minutes cleverly blurs the lines between immersive zombie game and emotional short film. Introducing us to protagonist John (Kieran Bew) with a gun to his head and a bloody wound on his arm, his daughter sits in the adjoining room, her own gun pointed at the dividing door, whilst a horde of the undead claw at the front door of their apartment. It’s at this point we’re told (via voiceover) that the infection usually takes 5-minutes to take hold (cue introduction to G-Shock branding) and the interactive elements comes thick and fast, as we rapidly help our frantic hero carry out a series of tests to discover if his memory is failing.

Created whilst studying at the Filmakademie Baden-Württemberg, producer Felix Faißt and director Niemann pitched their concept to G-Shock when it was already pretty advanced in the development stages. Providing around one-quarter/one-third of the total budget and the watches to use in the shoot, Faißt admits that without the finances provided from the watch company they would have had to “shoot a smaller and shorter film”. The cynic in me always assumed that the branded film label meant filmmakers would often have to compromise and adapt their work to their sponsors requirements, but Faißt couldn’t have been happier with G-Shock’s involvement, revealing they “had no creative influence at any stage of the production and they agreed to everything we presented to them”.

Although the inclusion of the G-Shock watches is a little heavy-handed at times and the actual narrative of the piece doesn’t really tread new ground in a genre you may quickly be getting tired of, where this piece thrives is in asking its audience to get involved in how the story plays out. Essentially asking its viewers to decide if dad John lives or dies, Five Minutes engulfs you in its universe by really making you feel the urgency of the situation its characters find themselves in. With a recent article on digital storytelling in the Guardian suggesting we as viewers want to inhabit storyworlds because of how stories work in the brain, we were eager to speak to the filmmakers behind the Five Minutes to find out their approach to digital storytelling and how they used the interactive elements to really immerse their audience in their on-screen universe:

Maximilian Niemann: “The great thing about our film school is that you are free to do almost anything you want within a certain framework. It’s always a lot of fun to experiment with new ways of storytelling and with Five Minutes we wanted to combine the best aspects of film and the internet. The core idea was to add another emotional dimension to the medium of film by putting the viewer in the main character’s perspective and exposing him to the same time pressure. In our opinion it is ultimately important to immerse the viewer in the story completely, thus he should feel that his interaction makes all the difference. We wanted to create an experience, where it’s not about collecting some abstract points, but a game in which you have to succeed to see the end of the film. Another aspect is time pressure, which has always been used in games as well as in films because it makes everything much more intense. But most importantly we really like the idea that both the main character and the viewer are under time pressure, so there is a strong bond between them.”

Felix Faißt: “The interactivity should really be integrated into every aspect of the film: the story, the imaging, the production design, and so on. So right from the beginning we had the interactive part in our mind in every step. During the coding there was a lot of trial and error whether games were working or not and what was actually technically possible. It was really hard for us to just imagine if a game would work or not, so Max coded various games and the best ones are now in the final game. Apart from a few good examples we saw many projects which just added some interactivity like an overlay and in the end it didn’t matter how well you played or if you played at all. Together with our interactive art directors Philipp Mooren and David Brenner we developed a very minimalistic design. On the one hand it shouldn’t distract from the film but on the other hand it should be really intuitive. The user should understand every button and every interface immediately without any explanation.”

Not everyone is going to enjoy the experience of Five Minutes. Those of you more used to the multitasking approach of watching online video, where your gaze flicks between a video in one window and some other content in another, might find the attention it requires too demanding or consuming. Those of you who are more experienced gamers, may find the challenges to simple (as a 35yr old father my gaming skills have severely diminished in recent years). However, take 5-minutes (or a little longer – who’s counting?) of your precious online time, turn-off all other distraction and delve head first into Niemann’s world of biters and timepieces and you might find it an action-packed experience, set to get that pulse racing and those nerves jangling.