Marcel survives the bird flu, alcohol, sleeping pills and his son Max. Though blinded in one eye, he remains the King of Tervuren.
READ REVIEW
Next Previous 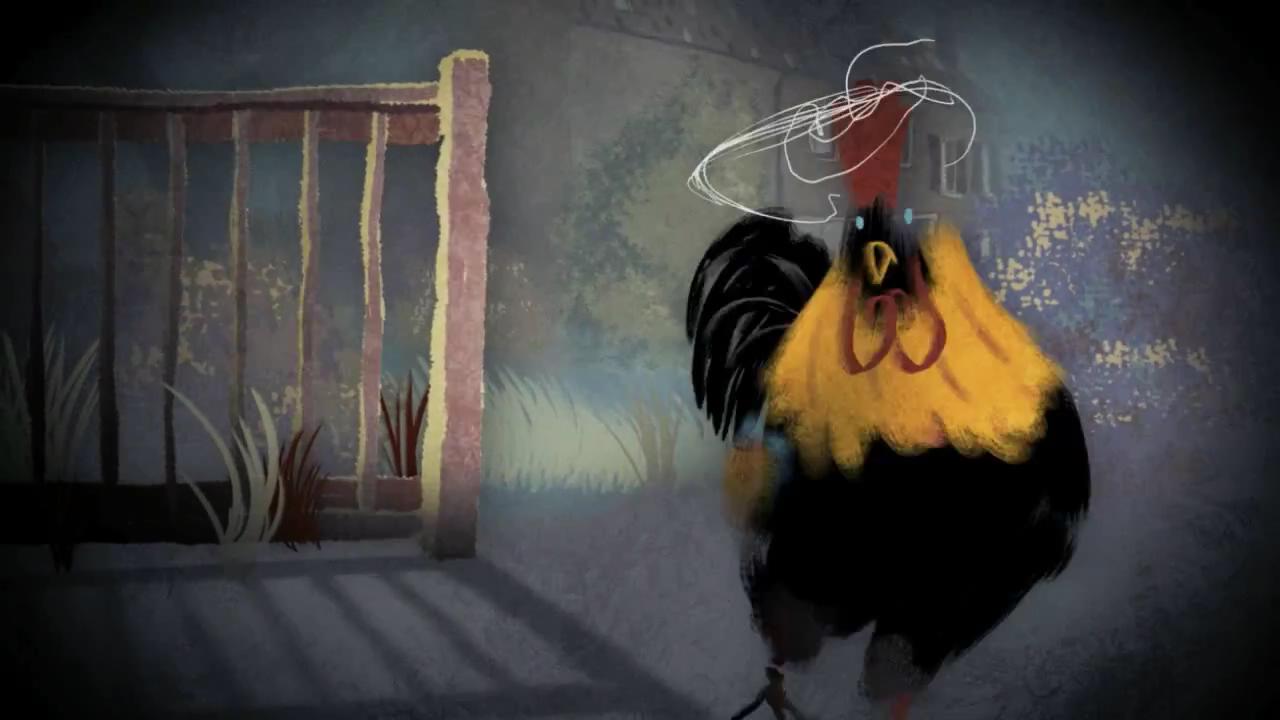 Described by its creator as a ‘Greek tragedy as acted out by Belgian roosters’, Tom Schroeder’s surprisingly touching and dramatic short Marcel, King of Tervuren is the tale of a seemingly indestructible cockerel determined to keep his crown as ruler of the roost. Blending a flowing animation style with an engaging narrative, Schroeder’s film quickly immerses you into its unexpected world of alcohol, drugs and family feuds.

Following its poultry protagonist as an epidemic of bird flu means he either needs to curb his wandering lifestyle or face the chop, the story of Marcel is vividly narrated by his female “owner” Ann. Chuckling her way through her recollections of how they tried to capture this “free-rooster” through various methods of intoxication, Marcel’s story sounds more like that of a rockstar’s being recited by a female fan, than that of a gallivanting rooster. The voiceover (along with a somewhat unnerving score) provides not only the driving force for the pace and direction of Schroeder’s storyline, but also adds real warmth and humour to the story with its personal touch.

With his camera playfully skittering around the colourful world he has created, Schroeder’s aesthetic playfully places you in the universe of its heroic cockerel. Told mostly through a point-of-view which embeds its audience directly in the farmyard in which Marcel prowls, the animator employs a flurry of bold lines and strong colours to emphasise this hectic period of near-death experiences for our resistant rooster.

Having played film festivals worldwide, from Annecy to Edinburgh and Hiroshima to Sundance, Marcel, King of Tervuren has had the kind of festival run you would expect from a filmmaker of Schroeder’s calibre. With a short film career now spanning 13-years (his first short Bike Ride was created in 2001), the filmmaker uses his storytelling experience to sweep his audience along with the frantic delivery of his unpredictable narrative. Despite its focus on fowl-play and its voiceless cast, Marcel, King of Tervuren turns out to be a short of real charm and warmth and although it features a blood-filled conclusion (apologies for the spoiler), they pay-off is as rewarding as some of the best-written fictional narratives.