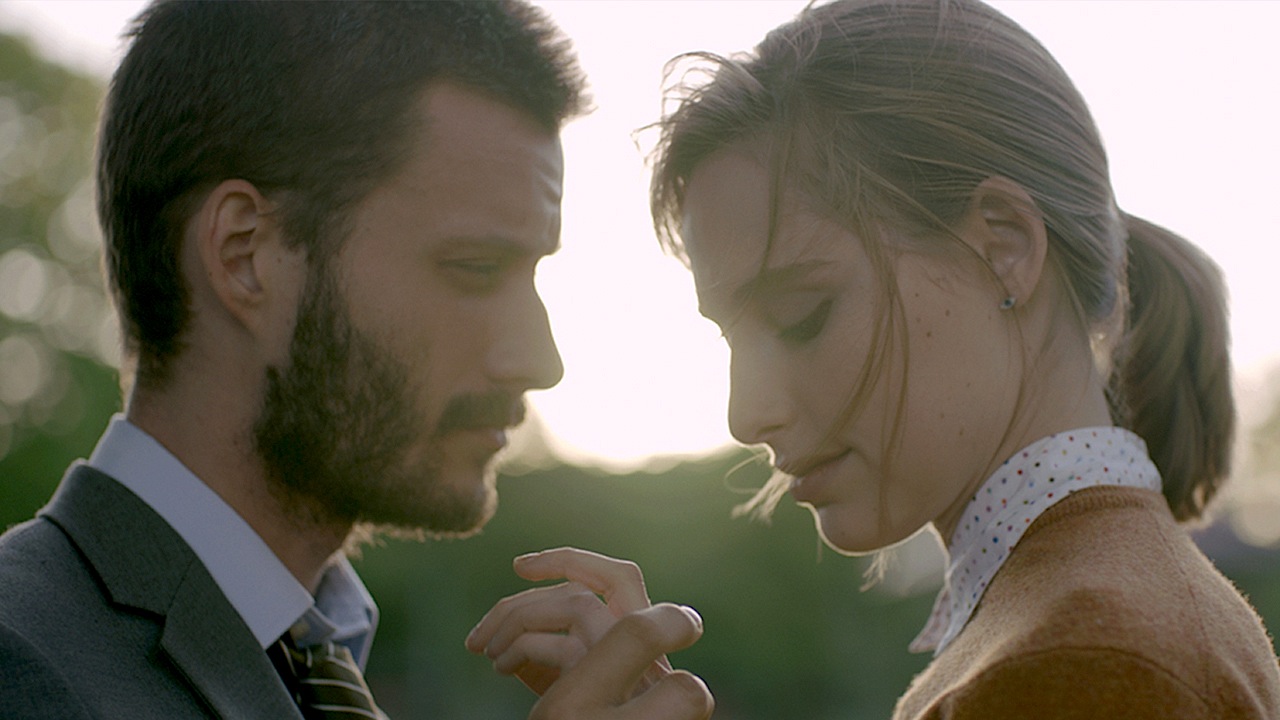 Director Kevin Lim’s Lichen is an ode, not to a Grecian Urn, but to the smallest, most seemingly-innocuous items that make up a relationship: an egg; a champagne cork; Lego Batman (yes, you read that right). To the outsider, these everyday, mundane trinkets mean next-to-nothing, but to those with insider knowledge  –  those who “get” the joke  –  these objects are priceless. Playing like a mixtape with tracks dedicated to love, loss, and memory, Lichen is a love story for romantics and non-romantics alike.

Li-kyun (noun ): a composite organism that can only exist in a symbiotic state

We meet “Boy” (played by Akos Armont) in a coffee shop, his Orthodontics books balanced atop the rickety table in front of him. As he attempts to study, a girl bumps into him, knocking his thick glasses to the floor. He bends to pick them up and in traditional meet-cute fashion he sees “Girl” (Hayley Magnus) across the room, a pretty blonde sporting braces and a knock-out set of headgear. They smile at one another  –  you know, in that “movie smile” way, where the curvature of their mouths proves just how fast they’ll end up together  –  and exchange a quiet wave. It’s a scene we’ve seen a million times. But just when you’re sure this is going to turn into another run-of-the-mill quirky romantic comedy, a waiter sets an egg down on Boy’s lopsided table, and from there we jump (in one of the film’s many creative transitions) to Halloween night, several years down the road. Girl has (sadly) lost her headgear, and Boy has turned into quite the dapper male lead. In what may be the film’s best and most technically-accomplished sequence, Boy and Girl attend separate Halloween parties (all shot in split-screen); by the end of the night, chance and coincidence force the two together and…well, you’ll just have to see for yourself.

Featuring some luscious cinematography (shot by Aaron McLisky, the Halloween scene mentioned above being a highlight) and a fantastic, ever-changing score by singer/songwriter Caitlin Park, Lichen is a romantic film that refuses to lay it on thick, infusing a certain sense of realism into what could have turned into a schmaltzy affair. The two lead actors do wonders without an ounce of dialogue; the amount of chemistry they display with just the slightest of glances towards one another make their performances all that more impressive.

It comes as no surprise that a filmmaker who names his short after a symbiotic fungus would have a background in science. Lim got a rush of creative inspiration while studying – of all things – quantum physics. “I remember reading this paper,” Lim said, “which proposed how microtubules within the human body could potentially act as a quantum ‘hard drive’ to store memories. I took the idea further and thought, What if inanimate objects could store memories? What if the keepsakes we hold onto from a relationship could act as a roadmap, telling the story of how two people met, fell in love and sired children?”

Ten years went by before the story found its way to the screen, but Lim never forgot that initial idea. After being granted seed money from his (incredibly kind) sister, Lim and a group of volunteers shot for almost four days in Sydney, Australia, utilizing the ARRI Alexa for the majority of the shoot. For the split-screen scene, Lim employed some old-fashioned guerilla-style techniques to get what he needed in terms of coverage: he split his crew into two different mobile units, each armed with a Canon 5D Mark II, then proceeded to follow the two lead actors, documentary-style, as they “gate-crashed various Halloween parties.”

Lim and Soda Honey Films have just completed their third short film together, entitled, Whispers Among Wolves, and are in the process of submitting to festivals. “Thematically,” Lim says, “there is some continuity – it’s a two-hander that explores a co-dependent relationship…and the idea of memories.” You can keep track of everything Soda Honey Films has to offer via their website or Facebook page.