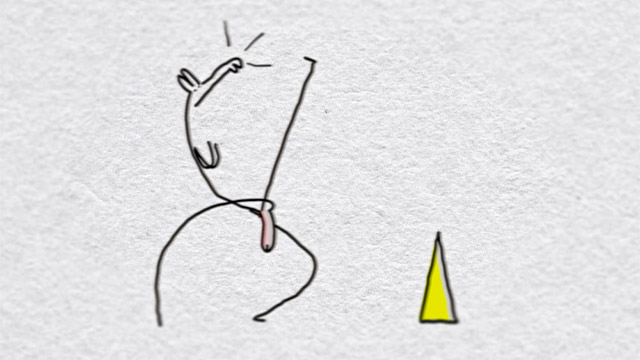 Lovingly restored by The Polish Film Club, Kristof Babaski’s 1957 animation Myszochujek (aka ‘Penismouse’) is the playful tale of a mouse who refuses to be censored by the oppressive authorities. Unreleased until 2014, the film club acquired the rights to this experimental animated short, transferred it to HD and added a reconstructed soundtrack so that a brand new audience could enjoy the exploits of this rebellious rodent.

Following the titular ‘Penismouse’ as he battles the system that wants him to cover his rather impressive rodent appendage, our protagonist has to avoid a bulldozer and bullets as he fights for his right to showcase his member. Offering fans of animation a new take on the cartoon mouse, on the surface Myszochujek may be a light hearted romp about an uninhibited mouse, but scratch that surface and you’ll find a story centred around control and censorship. Experimental in delivery, as well as in content, Babaski (literally) seemed interested in pushing boundaries with the visuals of his film, as well the narrative. Comically playing with the 4:3 frame which contains his main character, like with his story, his visual approach whilst entertaining and amusing, also seemed to have deeper roots intent on making a statement on the restraints of the world in which we live.

Now over 50 years old, whilst the simple line-drawn style of this animation may seem dated compared to more modern techniques, its narrative has stood the test of time and still feels as relevant and powerful all this time after it was originally created. Although it doesn’t look like there are any more ‘Penismouse’ films on the horizon, in a recent interview for Directors Notes Anika Jarzynka from The Polish Film Club admitted she hadn’t given up hope – “as far as I am aware this was the only Myszochujek film… But you never know, there could be another one hidden away somewhere waiting to be discovered”.