17-year-old Caroline breaks down after receiving a phone call delivering some tragic news, but her reaction soon reveals there is more to this call than first appears.
READ REVIEW
Next Previous 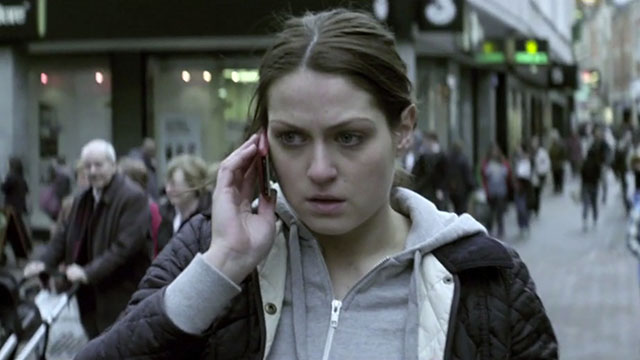 Inspired by a real incident witnessed by writer James Walker in central London, Echo, from director Lewis Arnold, is an emotive short that explores the lasting affect a father’s death has on his young family. Screened at festivals worldwide throughout 2013 and created whilst studying at the National Film and Television School in the UK, Arnold’s short centres on an outstanding performance from young lead Lauren Carse and a subtle, yet powerful story.

Introducing us to its protagonist Caroline as she receives an upsetting phone-call in the middle of a busy town centre, Echo quickly engulfs us in its dramatic narrative, as we witness this 17-year old begin to breakdown before our eyes. Speaking to Arnold over email, the filmmaker readily admits that the crew was nervous before casting, knowing that “the film relied on finding a girl who could naturally deliver the emotional stakes of the piece”. Whilst he was right to be anxious, the director and his production team struck gold when choosing their lead actresses, with the young Carse putting in a performance of great maturity and believability. In fact the performer’s distress was so convincing during filming of the opening scene, with the cameras away from the action, Carse would consistently have strangers approach her offering help.

Rarely absent on-screen throughout the film’s 18-minute duration, Arnold worked with trusted collaborator Alfie Biddle to ensure the camerawork perfectly captured Carse’s strong performance. Alternating between wide-shots of Carse looking lost in a bustling shopping precinct and close-ups of her anguished expression, Biddle’s camera orbits Caroline as we’re swept away in the whirlwind of lies surrounding her – without ever seeing the need for dizzying post-production techniques. With the foundations of Echo’s success cemented in performance and plot, Arnold and his crew are right not to overcomplicate the production. Employing long takes and carefully considered cuts, the directors approach means we are firmly placed in the mind of our protagonist and given the time necessary to digest her chaotic thought process.

With an open-ended conclusion to his short, Arnold admits that he enjoys the feeling that after his film has finished its audience will “still feel like the character exists beyond what you’ve seen” and will “take ownership of that character in their own mind”. Hoping the “unique baggage and experiences” of the film’s viewers will lead them to interpret his short in their own personal way, Echo’s plot delicately balances the act of spoon feeding its viewers the necessary information, whilst still leaving details of the story vague enough to let us form our own opinions of the on-screen events. Huge credit has to go to Arnold, Carse and Walker for ensuring that Lauren’s character didn’t become just another “damaged” teen con-artist. As the film comes to its conclusion, leaving us with the lasting impression of its protagonists tear-stained face, we’re still left wondering whether to be disgusted by her manipulative actions or distressed by this desperate cry for help.

With a TV series for UK channel E4 currently in pre-production, fellow National Film and Television School short Charlie Says still touring film festivals and a narrative-based music video for UK artist Wookie just released, I would summarise by declaring Lewis Arnold a name to remember in 2014 – but his consistent output and love for a strong narrative means his name is more-likely one short film fans are sure to find it difficult to forget.