Cicadas come out of the ground for a party at the end of their lives.
READ REVIEW
Next Previous 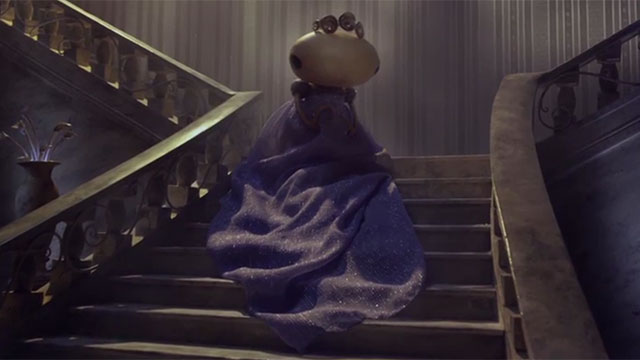 Revolving around the unusual lifecycle of the Cicada bug, Mauchi Baiocchi’s Cicada Princess is a charming mix of whimsical narrative and formidable technique, combining to create a unique and hugely enjoyable viewing experience. Based on a children’s book and referencing the classical tale of Cinderella throughout, this tale of insect love is brought to life in a magical universe of miniatures and puppetry.

For sixteen years cicadas live underground. They emerge for one glorious night to live out their lives in hope of finding happiness and maybe love. They gather for the grand Cicada ball knowing that when the sun rises, their lives will come to an end.

Developing his style and industry knowledge working in the visual effects departments on a series of Hollywood blockbusters, including Star Trek Into Darkness, Flight & Looper, the expertise of director Mauchi Baiocchi is all too evident in his visually stunning film. Beginning life on a kitchen table, the production of Cicada Princess quickly grew to occupy two studios and involve hundreds of hands-on contributors. Eager to emphasise the technique involved in creating his short, director Baiocchi is keen to point out that Cicada Princess is a puppeteered film and not, as some might mistake it, stop-motion animation. With his insect creations coming to life through digitally removed poles and wires and his sets, costumes and characters created by a highly skilled team of artists, the attention to detail in this meticulous short truly is a joy to behold. The talented director and his equally talented crew surpassing all expectations when ensuring his romantic insects and the world in which they inhabit are plausible. Ray Gilberti’s expertise in this specialised cinematography (the DoP shot miniatures photography on some 1980’s cinema classic including Return of the Jedi & Back to the Future), a particular highlight of this impressive production.

Completing the polished feel of Cicada Princess, audio also plays an important role in the success of Baiocchi’s short, the narration and score seemingly just as carefully considered as the visual elements in the film. Taking the role of narrator, the multi-talented Stephen Fry lends his authoritative tone to the short, guiding us through the extraordinary events in the lives of these fantastical creatures. Feeling like a cross between a wildlife documentarian and a fairytale author, his unobtrusive voiceover adding both to the engrossing nature of the film and its mythical tone. Working in perfect unison with the narrative, Jesse Solomon Clark’s delicate soundtrack provides an ideal backdrop to the tale of these equally fragile insects.

With his film continually growing in ambition throughout its production, Baiocchi’s short was made possible by the finances they were able to raise throughout production. Exploring all avenues available to find the money to complete Cicada Princess, the filmmaker used Sponsorship (The San Francisco Film Society, The Jim Henson Foundation), Crowdfunding (Kickstarter) and self-funding to ensure his short crossed the finishing line, meeting his high expectations along the way.

“Most folks spend a whole lifetime looking for something, Cicadas have but two days, two nights”.

With its resonating message of making the most of the time you have in this life still echoing strongly long after the credits have rolled, this charming tale feels like a classic story, told in a classical manner. A short for all ages and all generations to enjoy, Cicada Princess is a short I’d be as happy screening to my 15-month child, as I would my 89-year old grandmother.

With Cicada Princess now finished its festival tour and released online, the production team are already working on their next short film, a stop-motion adaptation of the Frances Fabris book Crickets Would Sing . Based on Fabri’s experiences of concentration camps at age 14, Baiocchi’s next short is already sounding like another unique film experience.