Nic Wooding is nothing like Bruce Lee. But he can play badminton too.
READ REVIEW
Next Previous 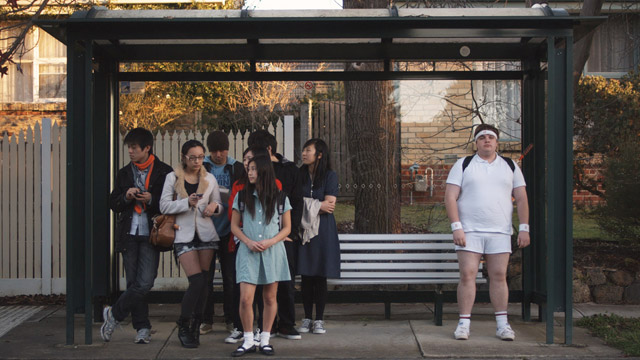 As a chaser to all the dark and heavy stuff we tend to feature on Short of the Week, I present to you Corrie Chen’s Bruce Lee Played Badminton Too—a charming, comedic fairy tale about a chubby kid with athletic dreams and a penchant for ill-fitting tennis wear. Unlike so many films of a similar ilk—where humor only appears in the darkest shades of black—Bruce Lee’s offbeat and light comedic stylings feel practically subversive. Yes, growing up is hard, but through her film, Chen seems to indicate that deep within all that teenage moping and melodrama there is a fair bit to laugh about.

The thing that makes this film so charming is that the protagonist, despite what his appearance may indicate, is actually a damn good badminton player. So often do husky heroes lack confidence, hindered by their own self-aware nature, but, here, our young lead has a genuine knack for swinging racquets and slapping shuttlecocks. Moreover, he’s an adolescent who actually believes in himself (how refreshing!): he’s on a mission to prove all the naysayers (i.e his overbearing father) wrong.

In regards to her creative inspiration, director Chen explains: “Driving home one night after work…I saw an extremely overweight, caucasian boy waiting at a bus stop, complete in badminton uniform, surrounding by a gaggle of small asian teenagers standing slightly apart from him. I thought to myself – I hope this boy wants to be, and will be, the greatest badminton champion in the world, despite all the cultural and racial stereotypes surrounding him that might argue the contrary.”

As that quote suggests, beyond being a growth story of a teen coming into his own, Bruce Lee presents an interesting intersection of cultural and racial clashes. Our lead character is a chubby white Australian whose hero is an Asian action star (from California), whose on-the-court opponent, crush, and new next door neighbor is a Chinese immigrant. While the film isn’t intended to be some deep dissection of xenophobia and cultural conceptions of the “other,” it does provide a brief look into a world where racial boundaries are blending together. East meets west, west meets east.

Chen, who is of Taiwanese descent, elaborates: “I knew from the get go I wanted to make a comedy in the vein of Bend It Like Beckham, but where the racial challenges were reversed so it was a caucasian that felt like an outsider.”  It’s an interesting twist on a story that is so often looked upon from the other way around—what happens when all those idyllic white picket fence houses are inhabited by anything but your typical White suburban families.

Partially funded by a small grant provided by the Australian government, Bruce Lee was shot over 3 and a half days on a RED ONE in the dead of the Melbourne winter (much to the discomfort of lead actor Nathan Derrick who traipses through  the majority of the film sporting short shorts). The result is a film that looks much more expensive than it actually was, with a talented production and post crew willing to volunteer their time.

As for what’s next, Chen is currently developing the idea of this short into a feature film. She’s also currently planning to direct a new short, Reg Makes Contact, a film developed and financed with the support of Screen Australia’s Hot Shots program. Be sure to visit her website and follow her on twitter to stay up to date.