On the eve of her thirteenth birthday, Esther Weary must come to terms with the realities of becoming a woman through her clueless grandfather and his pet pug.
READ REVIEW
Next Previous 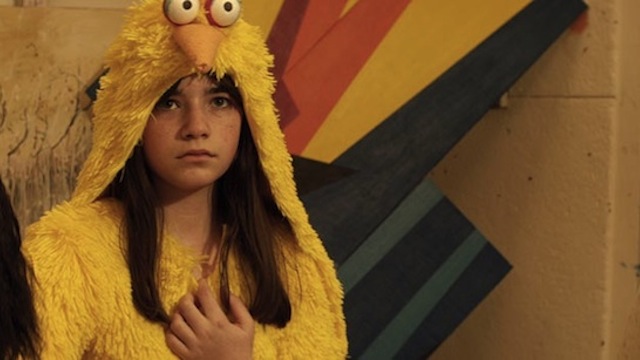 Though it starts off in the key of twee, with its adolescent characters in fanciful Halloween costumes, Life Doesn’t Frighten Me quickly alerts you to its inherent toughness. 13-year-old Esther is mercilessly picked on, even by her “friends.” In class when the teacher leads everyone in singing her “Happy Birthday,” she imagines herself as a piñata for her classmates to thrash. When a friend tells her that her nose is too big, “which basically means that you’re ugly,” she becomes even more self-conscious. To make matters even worse, she receives an unwanted birthday present from her changing body that sends her fleeing home in embarrassment.

It doesn’t help that her only caregiver is her grandfather (played to perfection by Canadian legend Gordon Pinsent), who’s not particularly good at expressing himself, especially when there are “girl things” to be discussed. What I love most about the film is the delicate mixture of whimsy and grit. As she hovers between childhood and something more murky and unforgiving, Esther seems to grow up before our eyes. The harsh advice she receives from her Grandpa seems cruel at first, but is based on the older man’s clear-eyed view of the world and his inarticulate but deep love for his granddaughter.

Though what he tells her is almost the polar opposite of “It Gets Better,” somehow it rings truer. Watching Esther process this hard truth, on her birthday, no less, is liable to break your heart a little. That it doesn’t crush her spirit is evident from the delightfully whimsical end titles, accompanied by a Sufjan Stevens song. She’s growing up fast, but hopefully not too fast.

After Life Doesn’t Frighten Me was selected for the Toronto International Film Festival in 2012 and picked up a slew of awards (including the CBC Short Film Face Off, televised across Canada), filmmaker Stephen Dunn followed it up with the very different short film We Wanted More which was selected for TIFF 2013. He’s currently working on Closet Monster, his first feature.